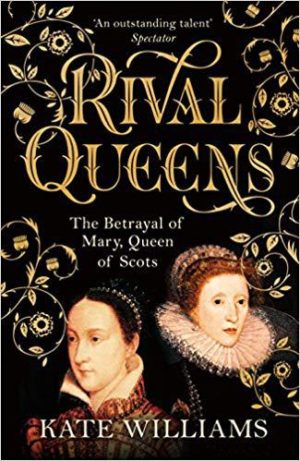 The clarity with which Williams explains the wildly complex politics of the Scottish court is exemplary.

One might be inclined to think - not another book about Mary, Queen of Scots and her cousin, Elizabeth I of England, surely the most written about women in Western history -  but Dr Williams’ new study is well-worth adding to your collection.

Williams has an amazing ability to explain complex and sometimes contradictory information coherently and clearly, in few words.  She manages to set the scene in Scotland before Mary’s return from France within a few pages – and show what a mountain Mary had to climb. Aged only eighteen, more-or-less abandoned by the Guise relatives who had once seen her as their key to dominating Europe, she landed in a Scotland that had changed beyond all recognition in her thirteen-year absence. When she had been sent to France, it was with the support of most of her nobles – they preferred French assistance to English domination. But the growth of Protestantism and the cavalier treatment of Scottish concerns by Henri II of France, had led to a volte-face. England was now the protector, and France the enemy.  Mary, as dowager-queen of France, largely brought up there and inculcated with French ideas of Scotland’s place as little more than a French province, would have needed to be a genius (or a man!) to convince her nobles that she could rule Scotland effectively.

Having established Mary, Williams turns to Elizabeth, and again, with marvellous economy of style, gives us Elizabeth’s background, and the issues that faced her. England had already had a queen regnant, so there was less resistance to the principle of a queen, and, more importantly, she had grown up in her land, and knew the politics of it. She had been an outsider during her sister’s reign, but had built a hidden network of support amongst men who were both competent and loyal, and who would form her core of advisors.  Elizabeth, unlike Mary, had the advantage that most of her rivals for the English crown were other women – Mary herself and the younger Grey sisters - whilst Mary had numerous half-brothers and quantities of Stewart cousins, who all thought they could do a better job than a woman.

Williams discusses the matrimonial options of the two queens, the suitors available (characterising Lord Darnley as ‘a handsome little bomb’ – my favourite line in the whole book) and the reasons each had for marrying or not marrying.  We move through disastrous marriage of Mary and Darnley, then the shocking assassination of Riccio, Mary’s ingenuity and courage and the birth of her son. Williams compares the very real fears and risks of deposition or even assassination that both queens ran.

The death of Darnley is discussed in excellent detail – looking at the different options for responsibility, and making a convincing case for Williams’ opinion of the real culprit (a case I would heartily endorse).  Mary’s reactions are analysed, and an explanation given for her reliance on Bothwell that ended so disastrously. Unfortunately, whilst Williams evokes a deep compassion for Mary the woman, and admiration for her personal courage, it is hard not to find Mary the queen as wanting.

The second half of the book covers the long exile of Mary in England – and Williams portrays an Elizabeth who was less powerful than is often thought – frequently outmanouevred by Cecil and Walsingham in their single-minded determination to prevent Mary either regaining the Scots throne, or being acknowledged as heir to the English one. As a woman, and a Catholic, there was nothing that Mary could ever have done to avoid their enmity, and Elizabeth would not overrule them.

All in all, this is a very welcome addition to the scholarship on Mary, particularly on her emotional and mental state following Darnley’s murder – and on Elizabeth’s limited freedom to support her sister-queen.