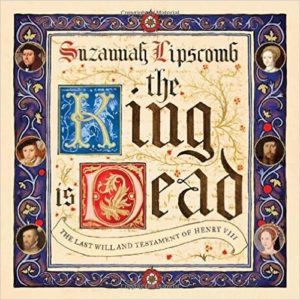 This review of the validity of Henry VIII’s will is comprehensive and forensic, yet eminently readable.

The legitimacy, or not, of Henry VIII’s will has been debated since the 1560s, when the supporters of Mary, Queen of Scots’ claim to be heir to the throne, impugned it, as not signed in the King’s own hand.

In a well-constructed account, Dr Lipscomb manages to examine all of the arguments about its validity whilst creating a narrative of how the document was created, who signed it, what Henry’s intentions were, and why, in her view, it was valid.

Her arguments lead her to question a widely-accepted view that there was a deliberate plot on the part of the evangelicals at Henry’s court to manoeuvre him into a creating a Regency Council that was more Protestant than the King would have approved, but Dr Lipscomb successfully identifies that some of the named councillors were conservatives. She also points out that men who later became much more radical were not necessarily so at the time of Henry’s death.

The matter of Henry’s will was taken up by Lacey Baldwin-Smith in the 1960s, when he claimed that the whole conciliar arrangement was contrary to political thought in the 1540s and would not, therefore be likely to be Henry’s preferred outcome for his son’s regency. Lipscomb demolishes this idea effectively, pointing out the increased authority of councils during Henry’s own reign.

Dr Lipscomb refutes Dr David Starkey’s contention that the last page of the will appears to have been tampered with by squeezing in extra lines through showing an illustration that seems to directly contradict him. She also disagrees with his overall assertion that the will would be overturned by a modern court.

I am not sure I absolutely concur with this – she mentions that all ten witnesses were beneficiaries, which would invalidate it in modern law, nevertheless, that certainly cannot be taken to mean it was invalid at the time. Dr Lipscomb is very persuasive in her argument that Henry’s will was exactly that – his attempt to complete the task she identifies as central to his whole reign – handing over his kingdom to his son, and keeping it out of the hands of the Scottish branch of his family.

At the end of the book is a transcription of the will – a painstaking task which will be very welcome to those unable to see the original in the National Archive.

Finally, a word about the book itself. With so much reading done on a mobile device, and even most hardback books being fairly pedestrian, this book was a delight to the eye in itself. The shape, the illuminated jacket, the wealth of illustrations, the high-quality paper, the use of coloured dividers and the interesting variation of fonts make it a delight to handle as well as to read.