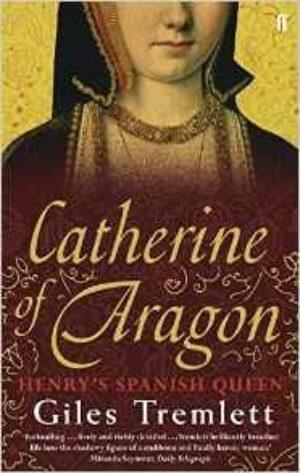 The use of Spanish material greatly enhances this root and branch re-evaluation of Katharine’s life.

Giles Tremlett’s biography of Katharine is the first major revision of her life since the 1942 work of Garrett Mattingley, which has been the authority on the Queen for sixty years, although she has, of course, been an integral part of the various joint biographies of Henry VIII’s wives.

Tremlett is not a dedicated Tudor historian, rather he is a specialist on Spanish history, and this gives his work a new, and more international feel, than the joint biographies where she is seen in an English context.

The substance of Tremlett's work is Katharine’s place in the wider Spanish foreign policy of surrounding France with its own allies. Initially, this was the vision of her parents, Ferdinand and and Isabella, but Tremlett demonstrates how the policy continued under Katharine’s nephew, the Emperor Charles V, who valued the connection with England highly until a change in the balance of European power, and the increasing threat of Ottoman incursion into his eastern territories changed his priorities.

Charles’ action in breaking off his betrothal to Katharine’s daughter, Mary, is seen as pivotal in Henry’s decision to seek an annulment of his marriage. The alliance had not delivered what the English King needed – real support in his ambitions (however unrealistic) to gain the throne of France, or, at worst, the prospect of a grandson being Holy Roman Emperor. Coupled with Katharine’s failure (as Henry saw it) to give him a son, her days were numbered.

Tremlett approaches the question of the consummation of Katharine’s first marriage armed with previously little reported information from the Spanish archives, which, whilst it cannot be conclusive as to the secrets of the marriage bed, are still an interesting addition to the debate.

Katharine is often portrayed as a Patient Griselda figure, but Tremlett rounds out this picture by considering her weaknesses as well as her strengths – although such judgements, are, of course, subjective. He illustrates her passionate nature - using the term in its sense of deep emotional commitment, and a willingness, even an eagerness, to embrace suffering. Whilst in comparison with her sister, Juana who whether or not she was “mad” was certainly extravagantly emotional, Katharine is calm and controlled, but her unyieldingness and certainty of purpose come across strongly. Tremlett illustrates this with information about the physical strain she put herself under during the years of widowhood – excessive prayer and fasting, which undermined her health, and became so extreme that the Pope exhorted her betrothed husband, Henry, to intervene.

This is an absorbing biography, with an interesting take on Katharine’s psychology – well worth reading.