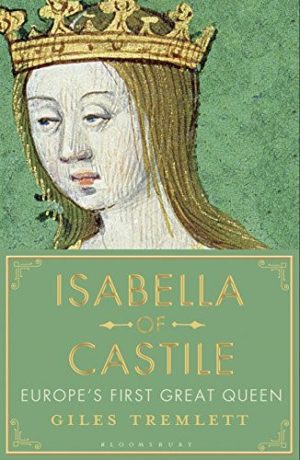 A rich, complex and comprehensive biography of one of the most powerful women Europe has ever known.

‘Show, don’t tell’, is the mantra that writers hear from publishers, agents and editors. This is a difficult task in non-fiction. How can you convey the character of someone who has been dead for hundreds of years, without inventing it? Less accomplished authors often fall into the trap of writing ‘so-and-so must have thought or felt such-and-such’ and speculating about an inner thought process we can never know. No such sentences fall from Tremlett’s pen, yet Isabella of Castile leaps from the page – every nuance of her character is immediately apparent from the judicious use of a range of sources, and the logical and coherent arguments that Tremlett draws from the facts.

Before this, I had read other biographies of Isabella, and had formed a generally favourable impression of her, but Tremlett’s uncompromising search for the truth has led me to rethink. Not that it is in any way a hatchet job, but that her actions, both good and bad, are allowed to speak for themselves and promote a more nuanced judgement.

Tremlett’s story of how Isabella usurped the crown, cleverly (if deeply distastefully) united her fractured society by creating ‘external’ enemies – the Conversos, the Jews, the Moors – devoted herself to justice as she saw it, and pursued her messianic vision of herself as a Crusader, is fascinating.

The bedrock of Isabella’s success, Tremlett argues, other than the steely and uncompromising nature of her character, was her relationship with her husband. In a world in which everyone assumed that a woman’s place was subordinate to her husband, the couple forged a partnership built on love, trust and respect. Ferdinand, a shrewd and successful king himself, was unique in appreciating that Isabella had the talent and ability to rule, and to perceive that together, they could triumph.

The book is chock-full of detailed information about the Granada campaigns, about the complex marital arrangements and weddings of Isabella’s off-spring and about the daily life of her court. Even Isabella’s taste for tales of chivalry and stories of adventure is woven into the picture we form of her character.