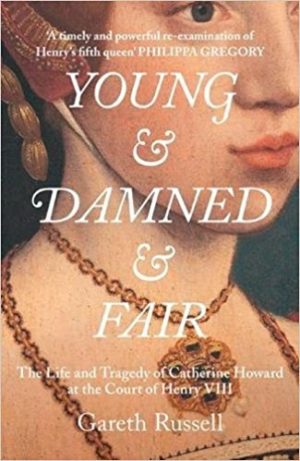 A well-researched and beautifully written account of a woman, who did not have enough maturity in herself, or good counsel from her closest friend, to understand that a queen’s life is not her own

In the great drama that is the story of Henry VIII and his six wives, his fifth wife, Katheryn Howard, is the one who receives the least respect. Unable to compete with Katharine of Aragon for sheer force of personality, with Anne Boleyn for the determination that upended a nation, with Katherine Parr for intellect, with Anne of Cleves for good fortune and with Jane Seymour for the status of mother-of-the-heir, Katheryn has been relegated to a caricature. Older accounts of her life portray her as girl of little sense and less virtue, whilst modern accounts often perceive her as the victim of sexual abuse, and nearly every biography paints her as the puppet of her uncle, the Duke of Norfolk.

Consequently, Russell’s work, which grew out of a dissertation on her household, is a revelation. He looks at Katheryn in the context of her queenship, which, externally, at least was successful – her poise, her grasp of etiquette and her public persona all received praise. Nevertheless, the woman behind the queen was often at odds with her formal presentation.

Russell starts with her upbringing. We know, of course, that supervision of Katheryn by her step-grandmother left much to be desired, but the idea that she was a hoyden with neither training nor education is soon scotched by Russell’s careful description of the rules of the household and the insistence on decorum and etiquette that permeated the dowager-duchess’s household. Katheryn was the granddaughter of a duke, and thus born to command – and far from being a neglected child, was at the centre of a group of affectionate friends and relatives.

Russell’s work is not only fascinating in its detail, it is also beautifully and evocatively written. The opening chapter, setting the scene for Katheryn’s wedding day has all the descriptive skill of a novel, transporting the reader between Cromwell’s execution on Tower Hill and Katheryn’s simultaneous nuptials at Oatlands Palace, in a way that is almost cinematic. Nevertheless, every detail is completely grounded in well-researched fact. Russell has even discovered that the apple trees at Oatlands had been transplanted from the dissolved Abbey at nearby Chertsey, and a few pages later we learn that the great lakes at Framlingham Castle covered nearly twenty-three acres. It is this familiarity with the minutiae of not just the Tudor court but the wider world that Katheryn inhabited that makes this work so absorbing and informative.

As we move through Katheryn’s adolescence to the astonishing decision that Henry VIII made to cast off his fourth wife to marry Katheryn, we can see with the desperate sadness of hindsight, how the passing indiscretions of a young and lively girl would cast a long shadow. Russell challenges the long-held view that Katheryn was deliberately pushed on the king by her family – pointing out that there was enough awareness of her relationship with Dereham for any deliberate promotion of her to be fraught with danger. He maintains that once the king had shown an interest, the Howards merely played the hand they were given.

It is impossible for us to know why Katheryn met with Culpepper in private and Russell does not attempt to explain her reckless actions. What he does do, is minutely review all of the details of the investigation into her and the trials of Dereham and Culpepper to show that, however bizarre the situation seems, the evidence against her was genuine – nothing like the fabricated charges that had brought down her cousin, Anne Boleyn, a mere five years earlier. Nevertheless, I was left desperately sorry for the terrible death of a young woman, horrified by the routine use of torture against the witnesses and, ultimately, thankful not to live at a court where every word, look or gesture might be used against me.

The way Russell deals with uncertain or disputed facts, such as Katheryn’s date and place of birth is excellent. He lays out the evidence and the different arguments and makes it clear how he has arrived at his conclusions. Where there is no evidence, he looks more widely to extrapolate from other information to reach plausible interpretations – amongst which is the implication that Katheryn’s father, Lord Edmund Howard, blighted his prospects of progression at court by beating Henry VIII in every round of a tournament, rather than following the tactful Charles Brandon in allowing himself to be overcome by the king.

I also enjoyed Russell’s turn of phrase - as when he sums up the whole outlook of the Howard family: ‘Where Edward IV had turned the Howards into enemies whose only chance of prosperity lay with toppling his lineage, Henry VII turned them into servitors whose hope lay in doglike obedience.’