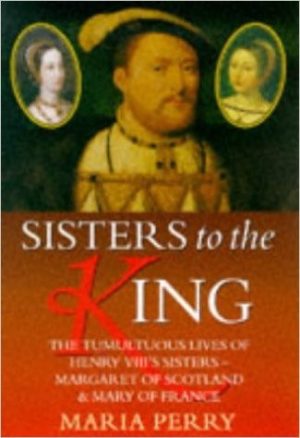 An introduction to the lives of Henry VIII’s sisters, but concentrates too much on Henry and his activities.

Henry VIII and his wives, particularly Katharine of Aragon and Anne Boleyn, have been written about extensively, so it is refreshing to come across a book that purports to deal with the lives of his sisters. Margaret, the elder, was married to James IV, King of Scots at the age of thirteen, and spent most of the rest of her life in the northern kingdom. Mary, married first to the King of France, was widowed and returned home swiftly, to live out her life in England.

Like their brother, both sisters made subsequent marriages that defied convention, and Margaret even managed to obtain an annulment from her second husband. This desire to promote personal happiness ahead of perceived duty perhaps makes the women seem more relevant to modern eyes. The premise of the work is therefore interesting, and, by and large, it adds to our sum of knowledge about the Tudor family as a whole.

Unfortunately, I felt that the sisters themselves were never really in the forefront of the narrative, which repeatedly swung back to Henry’s matrimonial difficulties. In particular, Anne Boleyn’s career received almost as much attention as that of the sisters.

An area that I would have liked to know more about was Margaret’s relationship with her daughter by Angus, Lady Margaret Douglas. No evidence has ever been produced about exactly where Lady Margaret spent her childhood – she may have been kept from her mother by Angus. It would have been interesting to find out what the possibilities were. Similarly, in 1536, when Lady Margaret was in disgrace with her uncle for conducting a love affair, Ms Perry says that Queen Margaret threatened to disown her daughter if she were not obedient to her uncle. She does not add that the Queen also begged her brother to spare Lady Margaret from punishment and to send her back to her mother to cared for.

By the end of the book, it is apparent that Perry is tired of Margaret, and I can have some sympathy with that as, unfortunately, the Queen does become tedious with her incessant begging letters. Nevertheless, after 200 odd pages of detail, much of which concentrates on Margaret’s attempts to control the Scottish government, to say that she became Regent of Scotland during her son, James V’s, absence in France in 1536 but then give no more information is startling. Especially as no citation is given for the statement, and other sources say that James left a Regency Council, headed by the Chancellor, Gavin Dunbar.

So, definitely worth reading to find out a bit more about Margaret and Mary, but not earth-shattering and some of the detail is questionable.