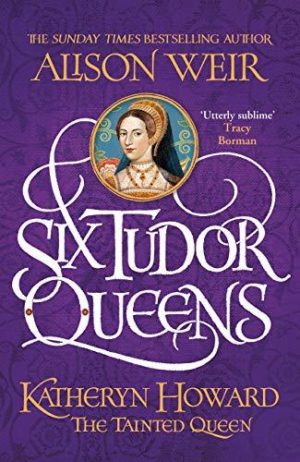 A sympathetic and believable account of a young girl who was betrayed by her own nature, and by the selfishness of those who claimed to care for her.

The understanding and interpretation of the life of Katheryn Howard, Henry VIII’s fifth queen, has probably changed more in the last fifty years than it did in the previous four hundred. For centuries, she was seen as ‘no better than she should be’, a wanton, a strumpet. Then, in the latter half of the twentieth century, as sexual mores changed, she was portrayed as a good-time girl, not afraid of her own sexuality. Today, she is often seen as a victim of child-abuse – a notion completely alien to her own time. She has also generally been portrayed as naïve at best, but probably stupid, to run the risks she did, in meeting Culpepper.

Weir has had the difficult job of navigating these readings to create a Katheryn who is both credible and sympathetic – a job she has pulled off with resounding success. Weir’s Katheryn is a child looking for love in a world which was harsh, and where, although she had material comfort, she had no-one to put her first, or truly care about her well-being. It is not surprising then, that she looks for love, and finds it in the wrong places. Throughout, Katheryn is portrayed as knowing what she should do, but not strong enough to follow the course she wants to set herself – she is easily persuaded and wants to keep people happy. Thus, she finds herself open to blackmail, that a more ruthless character might have found a way to nip in the bud.

Weir’s handling of Katheryn’s relationship with Henry VIII, is both interesting and believable. We should never forget that Henry, ruthless psychopath though he may seem to us, was a man of great charm and courtesy, particularly to women. There was nothing vulgar or gross about him. Weir shows how his kindness to Katheryn, his indulgence of her every whim, mixed, of course, with the power of her position, caused Katheryn to have a genuine fondness for her husband.

The other relationship, which no-one can ever really get to the bottom of, although Weir’s angle (which I won’t reveal) is interesting, is that of Lady Rochford with Katheryn – why did she aid and abet the queen in her dangerous meetings with Culpepper?

Overall, Weir’s portrayal of Katheryn, and how she found herself in the position she did, is psychologically credible – this Katheryn is a real woman, without the foreknowledge we have, whose tragic fate unfolds before us even as we keep shouting ‘don’t do it!’