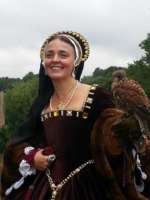 Sarah Morris, also known as The Tudor Travel Guide, lives in England, in the picturesque Oxfordshire countryside. She has been enthralled by the Tudors since she was a child, learning about them at school and spending many happy weekends and holidays touring historic properties with her parents.

She has appeared on TV, featuring in A Tale of Two Sisters for Yesterday TV, talking about the relationship between Anne and Mary Boleyn, and will soon be seen on Secrets D’Histoire (France 2) discussing the life of Mary I.

As The Tudor Travel Guide, Sarah runs a blog by the same name (www.thetudortravelguide.com) and produces a monthly podcast, focused on exploring Tudor places and artefacts, entitled The Tudor Travel Show.

What if you had the chance of unearthing an authentic, Tudor treasure? Well, during the course of researching In the Footsteps of the Six Wives of Henry VIII, I stumbled upon an intriguing enigma which sucked me in, compelling me to search for answers. I came across the existence of a set of 22 carved, oak panels decorating the interior of a sleepy parish church in Old Warden, Bedfordshire. One of the panels bore the monogram ‘AC’, surmounted by a coronet. It was from this that the legend of the panels had grown; that they were related to Anne of Cleves and had come from ‘Anne of Cleves private chapel in Bruges’. This city was a location that I was researching in relation to Anne’s journey from her homeland in Cleve, to England, where she was to marry King Henry VIII - and so my interest was piqued!

There was scant information to be found; some antiquarians and later historians, who had commented on the panels, came to disparate conclusions about their origin. One stated that the panels were from France, others that they came from England, Belgium or Italy. There was no consistent conclusion as to their age either. An early 20th-century account suggested the carvings in the church (including the panels) were carved in the 16th and 17th centuries, while another dated the panels themselves to the 18th century.

And so began my quest to unearth the truth about the Anne of Cleves panels. Working in conjunction with a local historian, who knew a great deal about the church and its eccentric lord of the manor (responsible for assembling the carvings to decorate the parish church in the 19th-century), Jonathan Foyle, architectural historian, and Helen Hughes, a forensic scientist, we began to delve into the available physical, historical and forensic evidence. This would turn out to be an adventure of a lifetime, with incredible twists and turns along the way...but would we finally be able to reveal the truth about the real provenance of the panels and would we unearth an authentic, Tudor treasure?

Watch the story unfold in this short film .....