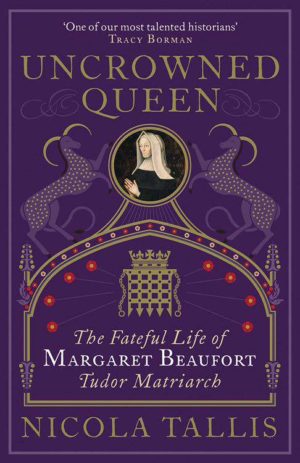 Tallis brings the human side of Margaret Beaufort to the fore, showing a more rounded woman than many are aware of

Since the phenomenon of Philippa Gregory’s books on the Wars of the Roses, Margaret Beaufort has been cast as a pantomime villain, plotting from the age of thirteen to nab the English throne, and eliminate anyone who stood in her way. Thankfully, Tallis’ biography of Margaret punctures this cartoon portrayal, with a well-researched, and well-structured vision of Margaret as a real human being. What we see is Margaret as a woman of her time – working within the social and political constraints of her gender and position to promote her own, and her family’s interests – the latter being considered a moral duty at the time.

Politically Margaret is revealed as being far from a fanatic with an idée fixée, but rather as a pragmatist. Her overwhelming desire during the reign of Edward IV was for Henry to be allowed to return from exile and take up his father’s earldom. The vast majority of Lancastrians had been reconciled to the Yorkist king, so there was no reason why this outcome was not perfectly feasible – and perhaps would have occurred, had Edward lived longer. It was only his early death that threw the dice in the air.

Tallis has undertaken extensive research into Margaret’s own papers and accounts to reveal a woman who enjoyed hunting (bet you didn’t know that!), card-playing, music, jewellery and fine clothes. Underlying all this, however, was Margaret’s deep piety – even in relation to the norms of the period, she seems to have been exceptionally religious. But it was not just a religion of form, everything that Tallis has discovered points to Margaret as carrying out the charitable acts expected of Christians. In particular, her patronage of education is covered in some detail – although, counter-balancing these traits of generosity, it is apparent that Margaret liked to hold on to what she thought was her own.

So far as Margaret’s personal relationships are concerned, Tallis gives interpretations based on the evidence available – pleasingly, she does not speculate too far about things we can never know.

A nuanced and realistic portrait of a formidable and multi-faceted woman.