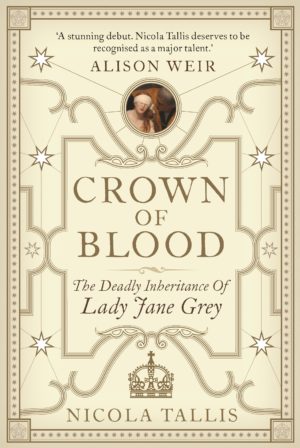 A sympathetic and engaging portrait of Lady Jane Grey, this concentrates on the personal relationships and the human side of her tragic fate.

The story of Lady Jane Grey was made for Hollywood – the gentle, scholarly girl, bullied by greedy, ambitions parents; forced into marriage against her will; thrust onto a throne she did not want, and finally, killed by an avenging tyrant. But is that story true?

Nicola Tallis has written the first full-length biography of Jane since Chapman’s work of the 1980s and it is great to see a fresh look at the material. Tallis’s strength is in the emotional and familial aspects of Jane’s life. In particular, Jane’s parents, generally characterised as stupid, abusive and ambitious, take on more reality as rounded individuals. Tallis challenges the long-standing idea that they physically or mentally abused her.  She shows that the single piece of evidence regarding ‘nips and pinches’ was written after Jane’s death and probably to demonstrate a point about Jane’s faultless Protestant virtue, rather than to record any strictness beyond that usual in a Tudor home.

Other evidence is also adduced to support Tallis’ contention that Jane’s relationship with both her parents was closer than it is usually portrayed. She touches on the idea that Jane’s utter devotion to Protestantism was the result of her closeness to her father, who was an early espouser of evangelical thought.

It is undoubtedly true that Jane was a girl of exceptional intellectual ability and Tallis has delved deep into Jane’s surviving correspondence to trace her academic development. She was corresponding with the Protestant reformer, Bullinger, whilst still in her early teens.

Jane’s marriage to Guilford Dudley has been variously portrayed in fiction – a forced union with a man she disliked, a love match, or a matter of political expediency. Tallis’ view is that Jane was deeply disappointed to be married to the younger son of a duke when there had been talk of her marrying Edward VI – although, of course, in the end he died young, catapulting Jane to centre stage.

Tallis strongly supports the traditional interpretation of the political manoeuvrings that sought to make Jane queen – that the Duke of Northumberland was behind the whole scheme and that Jane was a completely innocent victim. This is different from the interpretation of Professor Ives in ‘The Mystery of Lady Jane Grey’ and that of Leanda de Lisle in ‘The Sisters who would be Queen’.  It would have enhanced the book to have some debate about these different perspectives.

What is positive, in a debate which often pits Jane against her cousin, Mary, as black and white, good and bad, is the nuanced picture Tallis draws of their personal relationship. She also shows that both carried their religious convictions way beyond what the modern mind can truly identify with.

Stylistically, this is an enjoyable read – although occasionally the same information about an individual’s role or relationship with Jane was repeated more frequently than necessary.

As a reader who enjoys material about the clothes, the jewels, the ceremonies and the food of the period, I very much appreciated the details in these areas that reflect Tallis’ original research, and give a sense of location and reality to Jane’s life.