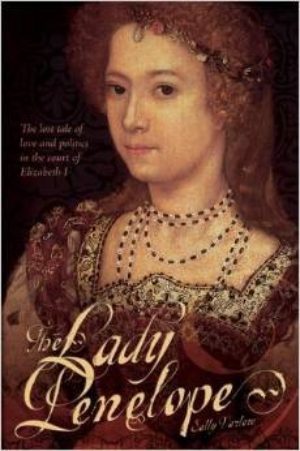 A wealth of facts, and very readable, but marred by its partisan perspective and fictional style.

Now, thanks to Sally Varlow’s painstaking accumulation of detail, and engaging style,the charm, wit and beauty that made Lady Penelope the muse, not just of Sir Philip Sidney, but of poets, musicians and playwrights, leaps from the page, as does her warmth and generosity towards her family and friends.

Varlow also considers the relationship between Lady Penelope and her first husband, Lord Rich, more temperately than is often done. She shows that, for the early years of their marriage at least, the two got along as well as most partners in arranged marriages, and she also gives a plausible explanation of Rich’s ongoing willingness to turn a blind eye to Lady Penelope’s relationship with Lord Mountjoy.

One of the most interesting aspects of late sixteenth century life that the book illustrates, is the fluid nature of religious allegiance. Lady Penelope’s grandfather, father, guardian, step-father and husband were all strong adherents of the Protestant, even Puritan cause, yet she herself flirted with Catholicism, apparently almost converting under the eloquence of Father John Gerard.

Unfortunately, the very charisma that Lady Penelope exerted in her own time, seems to have unduly influenced the author, too. The book crosses the line between a positive interpretation of the subject, and an almost novelistic identification with her.

Whilst I prefer biographers to at least like their protagonist, this should not render them completely blind to their flaws, nor should it cloud their judgement on the subject’s interaction with the wider world. The author seems to struggle to understand that Elizabeth I had a duty beyond pandering to the sense of entitlement that seems to have permeated Penelope and Essex ’s whole life. Just because Essex wanted to be her chief minister, and Penelope wanted it for him, does not mean that Elizabeth should have placed him in that role. Varlow, however, gives the impression that this failure on Elizabeth’s part to promote Essex to the level of his own view of himself, was a reflection of the Queen’s ‘corrupt’ Government.

One of Varlow’s recurring theories, is that Elizabeth I favoured Lady Penelope not just as the descendant of Elizabeth’s aunt, Mary Boleyn, but because her grand-mother, Katherine, rather than being the daughter of Mary’s husband, William Carey, was, in fact, the illegitimate daughter of Henry VIII. Whilst the evidence adduced by the author that Katherine Carey was Henry’s daughter is certainly plausible, the argument is far bearing from the “almost-certain” weight that she gives it. There is no evidence relating to the length of Henry VIII and Mary Boleyn’s relationship – it may have gone on for several years, as Varlow contends. Equally, it might have been a brief fling. Further, to claim that Mary Boleyn would not have slept with her husband because she was having an affair with the King, cannot be more than speculation.

Overall, the book was enjoyable and informative, giving an interesting insight into the factional politics of the late Elizabethan age but, in my view, it would probably have been better as a novel.