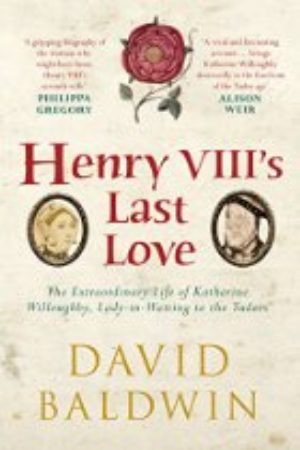 A great introduction for the Tudor enthusiast to a woman who was at the centre of the court of Henry VIII in the latter years of his reign.

If you are expecting from the title that this book is going to be one long speculation on the relationship between Katherine Willoughby and Henry VIII, then you would be very much mistaken. Although Baldwin touches on this, and rather improbably asserts that Willoughby was Henry's mistress, one gets the impression that this is more in the nature of a marketing ploy than intended as the heart of what is, in fact, a very workmanlike biography.

Baldwin has immersed himself in Katherine's correspondence and draws very clear inferences about her actions and character, based so far as possible on her own words. He does not indulge in speculation about how Katherine must have felt about this or that, nor does he put a 21st century perspective on Katherine's marriage at the age of fourteen to a man of nearly fifty.

Instead he shows how, in the context of the time, she made a success of this marriage, although he does point up her later correspondence where she inveighs against the practice of parents agreeing marriages without taking into account the feelings of their children. We are left to draw our own conclusions; Baldwin does not make them for us.

The author describes the day to day details of Katherine’s life in as much detail as possible, based on records. Where information is not specific to her, reasonable assumptions about what she wore and ate and how she travelled, are based on what is known of other women of Katherine’s class and time.

The author identifies that at some point Katherine made the journey from traditional religion to an extreme Calvinist interpretation, but gives us little about the wider religious and political implications of this, nor does he attempt to identify how this happened, or how the circle of Reformers around the Grey family grew up.

Baldwin touches on Katherine’s relationships with members of the wider Tudor court, particularly with her friend Katherine Parr, but, disappointingly, does not endeavour to uncover the complexities behind her relationship with Elizabeth. He quotes extensively from a letter in which Katherine is clearly terrified that she might lose her head during Elizabeth’s reign, but does not give much context to it.

It would also have been interesting to know more about Katherine and her second husband, Bertie's, sojourn in the Polish-Lithuanian Commonwealth.

In all, this was a useful and interesting introduction to a woman who was obviously a formidable force in her own time. It would be great if Mr Baldwin had the time and inclination to delve further - he has scratched the surface engagingly, leaving me wanting more.

We received a review copy of this book from the publisher.