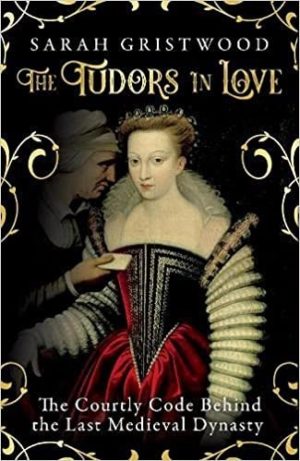 Gristwood examines how the great mediaeval game of courtly love both shaped the Tudor family’s concept of love, and also made it deadly…

Gristwood opens with a history of the development of the idea of courtly love, at the heart of which was the principle of non-consummation. The love-sick swain would woo his lady, out of reach because she was married, and often of higher rank. His aim was to serve her, she was his ‘sovereign’. At the same time, there was a dichotomy in the poets’ attitudes to women – if they succumbed to their lovers' importunities, they were sinful and unchaste, if they maintained an icy distance, they were cruel. Mediaeval writers were not blind to this paradox – Christine de Pisan was particularly scathing and Gristwood examines the social complexities that the separation of love and marriage created. She also probes the varying portrayals of Guinevere, as both the heroine of the immensely popular Arthurian tales, which, given that Arthur was supposed to have actually existed, were widely read as history, and her role in its demise, through her doomed love affair with Lancelot.

This courtly tradition of love was so prevalent in the fifteenth and sixteenth centuries as to be part of the paradigm of social life amongst the elite. But at some point in the late fifteenth century, the concept of courtly love collided with the idea that it should be part of marital love, hitherto seen as an emotion built on affection, respect, and duty, to be felt after marriage. The marriage of Edward IV and Elizabeth Woodville was one of the earliest examples of prioritising passion over political marriage, whilst the marital partnership of Henry VII and Elizabeth of York was a model for the traditional notion of married affection.

Having set the scene, Gristwood then undertakes some quite complex analysis of how combining these two ideals created problems for the children of Henry and Elizabeth. Both their daughters, Margaret and Mary, made conventional royal matches, to the kings of Scotland and France respectively, but both then made love-matches. Margaret twice, and in neither relationship did she find as much love or support as she had received from her arranged marriage – perhaps the love was on her side, whilst her spouses were still motivated by practicality. Mary was luckier, seeming to find a reasonably happy outcome with the Duke of Suffolk.

For their brother, Henry VIII, the difficulties of combining courtly love with marriage were almost insuperable. His first marriage, to Katharine of Aragon, managed to unite both, at least initially. The couple were genuinely attached to each other, and Henry could joust as Sir Loyal Heart, wearing Katharine’s colours and worshipping her as his lady. But problems arose when the political purpose of the marriage foundered on their lack of sons and the harsh realities of European politics. It was also dealt a mortal blow by the appearance of Anne Boleyn, the great passion of Henry’s life.

Initially, Henry pursued Anne in terms of courtly love – she would be his mistress, his sovereign, he would be her devoted servant. But then, unable to separate the two concepts of courtly and marital love, he married her. For Anne, making that transition was hard – she was no longer the power in the relationship, with the choice of accepting or rejecting her swain, she had a job to do, the prosaic business of bearing children. The marriage could not survive these strains, and the charges against Anne perverted the game of courtly love into accusations of adultery and incest.

Gristwood skates over the marriage of Mary I and Philip of Spain, although it would bear examining in this context, and the book really comes into its own in the second half, devoted to Elizabeth I’s reinvigoration of the game of courtly love, and how she played it brilliantly to enable the powerful men who surrounded her to sugar their subjection to a female monarch, with the sweetness of lingering glances, and poetic longings. The trouble with Elizabeth’s success in bending the traditions of courtly love to her purpose, was that as she aged, the fantasy became harder to sustain. By the last decade of her reign, Essex, in particular, was struggling to accept female rule – despite warnings, he failed to understand that Elizabeth’s use of the courtly love trope was to save the pride of the men who surrounded her. Her power was real, and ultimately, she would use it to protect her throne.

Gristwood has opened my eyes to new interpretations of the Tudor court. In one or two places, the book felt slightly rushed – perhaps there is just so much to say that it couldn’t easily be packed into the word count – but overall, the ideas and analysis are fascinating.