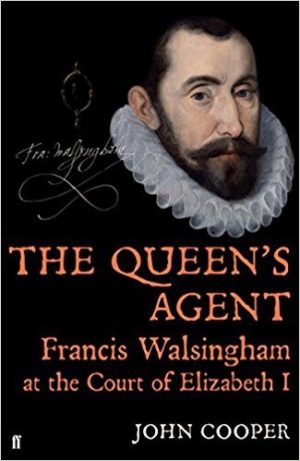 A comprehensive, yet very readable, account of Walsingham’s life.

Sir Francis Walsingham is always depicted dressed in black. In films, he is surrounded by papers, seldom speaks except to utter dire warnings or whisper conspiratorially into the ears of the spies he sends to every corner of Europe in his attempts to keep Queen Elizabeth safe from Catholics, Spaniards and the minions of Mary, Queen of Scots. As with his clothes, there are no shades of grey – Elizabeth good, Mary bad; Catholics evil, Protestants godly. In essence, he is a one-dimensional figure.

This is the legacy with which his biographer must deal. How can you give humanity to a man when almost all the copious information we have about him derives from his working papers? There are reams of documents relating to Walsingham’s activities as Secretary to the queen – letters, a journal, acts of the Privy Council, even the books written after his death by two of his colleagues on how to be a good Secretary. But of his personal life, there remains almost nothing, other than an indication that he was partial to falconry, and, perhaps more surprisingly, that he enjoyed theatre.

Cooper’s task was hard, yet he manages to write a comprehensive biography that is interesting, well-written and informative, from which we get at least some sense of the man behind the minister. He does this through attention to detail, and to drawing inferences from different facts – a small example is his identification of Walsingham’s home at Barn Elms as the centre for his activities as spymaster, because of the number of horses stable there.

Walsingham is a controversial figure – did his actions in regard to Mary, Queen of Scots amount to a level of entrapment that both then and now was morally questionable, or did he take no more than legitimate steps to protect Elizabeth? Cooper discusses both sides of the question, and ultimately you are left feeling that, whilst he admires Walsingham’s diligence, intelligence and zeal for his country’s security, the Secretary perhaps went too far.

An interesting perspective on Walsingham which Cooper draws out, is his view of monarchy. Cooper postulates that the Secretary was heavily influenced by the train of thinking that saw monarchs as answerable to the people – tyrants could legitimately be overthrown. This was not an attitude to endear him to Elizabeth, and their sometimes prickly relationship is well illustrated.

For a thorough view of the man and his times, it would be difficult to fault this book. Highly recommended.