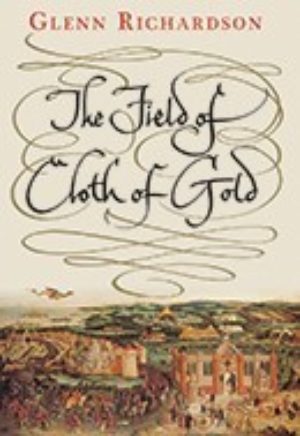 An account of the most extravagant summit of the sixteenth century, that swoops smoothly from European diplomatic strategy to the minute detail of a French tentmaker’s wages.

Since the study of history as an academic discipline began in the mid-nineteenth century, the Field of Cloth of Gold has been dismissed by historians as an essentially wasteful, pointless, and deeply unserious junket, performed by Henry VIII of England and François I of France for no more compelling reasons than their own vanity. Since both had vast egos, the resulting display was truly splendid, even if, as the historians argued, hollow.

Professor Richardson has turned this long-held view on its head – asking why two men, who were as intelligent as they were narcissistic, would expend the time, money, and political capital on a pointless spectacle? He answers that question very convincingly: far from being a mere excuse for a party, the political and diplomatic intent behind the Field of Cloth of Gold was meaningful and important in a Europe that had long been torn by war, and was facing a potentially existential crisis from the advance of the Ottomans.

Richardson sets out the political background – the rivalry for the leadership of Europe between François and his nemesis, the Emperor Charles V; the role of Henry VIII as balance and arbiter between the two, created by the indefatigable and supremely intelligent Cardinal Wolsey, and the simmering tensions of the struggle for control of Italy and the nascent Reformation. The scene set, Richardson then explores the tactical and practical steps taken by both sides to create the Field. His grasp of detail is exceptional, yet never bogs the narrative down. We discover that the silk fringing for the French pavilions weighed 200lbs, whilst the Italian merchant Cavalcanti received the eye-watering sum of £2,355 17s 4d for providing Henry and his entourage with cloth of gold and silver.

The project management required to stage the Field – people, buildings, provisions, entertainment – was not only prodigious in complexity, but fraught with delicate diplomatic issues. Richardson identifies the teams working on both sides, the problems they encountered and how they were solved. He notes that the presence of both English and French teams working together on a joint project of this magnitude was not repeated until the Concorde project of the twentieth century.

The book contains a wealth of fascinating detail but never loses sight of the political machinations being carried out on both sides. For a view of a Tudor event that allows us to understand many of the practical aspects of how the courts worked, as well as the strategic visions of kings, this book can hardly be bettered.