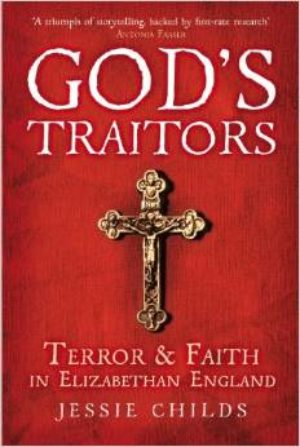 This is for the well-informed reader, keen to understand the complexity of the politics behind the Gunpowder Plot.

God's Traitors is a first class work combining detailed scholarship with a sense of suspense, as Ms Childs follows the cat and mouse game played between the Catholic recusants in Elizabethan England and the state surveillance machine.

As England felt increasingly threatened by Catholic enemies abroad, in the last quarter of the sixteenth century, the effective toleration of the early years of Elizabeth's reign was replaced by increasingly draconian penal laws.

The hard line taken by the Catholic Church, invigorated by the Counter-Reformation and the messianic zeal of Philip II of Spain took away the option of outward conformity that had enabled the significant minority (if not majority) of the population who were uncomfortable with the Anglican Settlement to live with it. When forced to choose between country and religion, all but the most devout were inclined to choose their country. This left a hard core prepared to go to extreme lengths to hear the Mass said, to harbour priests, and for a small group, turn a blind eye to active plots against the Queen, and later, against King James: culminating in the most famous treason of all - the Gunpowder Plot.

Ms Childs traces the activities of one family in particular, the Vaux of Harrowden, Northampton, who, together with their multifarious cousins, Digbys, Catesbys and Treshams, were at the heart of the tangled webs of familial relationships and religious kinship.

In particular, she focuses on the Vaux sisters, Eleanor, Mrs Brooksby and Anne, who never married. They, with their sister-in-law Eliza, hid priests, recruited converts, taught the next generation and brought the intense, and to modern sensibilities overpoweringly emotive, Counter-Reformation Catholic zeal into the country houses of the gentry, stiffening the traditional religion with the new blood of the Jesuits.

The other main characters are, of course the priests and Jesuits themselves, and this is where the lay reader can get a little confused in understanding the different missions of these two groups and the in-fighting that certainly didn't help their cause. A bit more explanation of the differences might have been helpful. Things become even more confusing as the two Jesuit leaders Gerard and Garnet, have names that look quite similar on the page, although they clearly had very different approaches to achieving the mission of reconversion.

Ms Childs deals well with the different treatment, in most cases, of men and women. By and large, the gentry women were given a great deal more latitude by the Crown's officers, who were uncomfortable pursuing women in their own homes. She also explores the importance of local relationships, pointing out that the Cecils who leant towards Puritanism nevertheless protected their Tresham friends and neighbours where possible.

The rigorous research into the letters and papers of the Vaux and Tresham families reveals unsavoury bickering over money, proving that even people willing to be martyred for their faith are just as likely to be quarrelsome, money-grubbing and intransigent as their fellows.

Interestingly, Childs notes the wasted lives of the younger generation of recusant men, born in the mid years of Elizabeth's reign, with no memory of a time when their faith was the norm, but prevented by their refusal to swear to the monarch's supremacy from undertaking the duties and offices of their class. This left these young men to idle their time away, in brawling, gambling and plotting.

The real hero of the age, though, was Nicholas Owen , the carpenter whose ingenious priest holes enabled the quarry to hide from the huntsman – within the chimney breast, behind the wainscot and even under the privy. Owen's creations were so cunning, that new ones were still coming to light in the last century. Despite agonising torture, he betrayed nothing.

Reading this excellent work, I am reminded again how lucky we are to live in a country that has turned its back on the persecution so intelligently and comprehensively narrated here.