Marguerite was the Emperor’s daughter, and a valuable marital prize. She was promised first to the dauphin of France, and was brought up at the French court. The marriage was not completed, so she was shipped to Spain to marry the heir to Ferdinand and Isabella. He died young, and a third marriage was arranged, happy, but short. Refusing all other offers of marriage, Marguerite became the mainstay of Hapsburg rule in the Low Countries. Her diplomacy was admired, and she was instrumental in arranging the Ladies’ Peace of 1529.

Marguerite lived in four countries, an unusual breadth of experience in the sixteenth century. Once she had settled back in the Low Countries, she travelled within them, but seldom went further afield, until she went to her final resting place in Savoy, beside her beloved second husband.

As well as being much-respected ruler, Marguerite was a woman of sophisticated and cultured tastes. She patronised many scholars, including Erasmus, and she created a fine collection of both art and tapestry. Her greatest artistic contribution to Renaissance architecture is the memorial she created at Brou.

Marguerite is at the heart of Sarah Gristwood’s masterly Game of Queens, reviewed here. 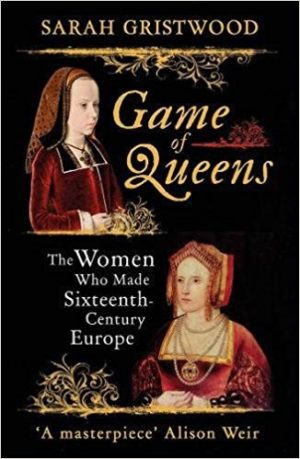