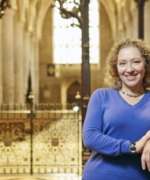 Following her time at Oxford, Sarah went into journalism and has written for most of the UK’s leading newspapers – The Times, the Guardian, The Telegraph (Daily and Sunday) – and magazines from Cosmopolitan to Country Living and Sight and Sound to The New Statesman. Her best-selling Tudor biographies, 'Arbella: England’s Lost Queen' and 'Elizabeth and Leicester', were followed by the widely-acclaimed ‘Blood Sisters: the Women behind the Wars of the Roses’ and 'Game of Queens: the Women who made sixteenth century Europe'.

She was 51 when they met at court, and he was no more than 19. She was 65 when they saw each other for the last time, and he was not far into his thirties. She was the Queen of England, and he had grown powerful on her bounty. He had hailed her as a goddess come to earth: written letters of love, and in he may even have meant them. Yet he would lead armed men to topple her throne, she would order his head cut off…

You couldn’t make it up. Luckily you don’t have to: luckily, for the sake of at least one rather famous old Hollywood movie. Errol Flynn and Bette Davis, anybody?

But although the relationship of Elizabeth Tudor and Robert Devereux, 2nd Earl of Essex has intrigued through the centuries, it’s one we still confront only with difficulty.

Robert Devereux was born on 10th November, 1565 - or, just possibly, on the same date in 1566 or 1567. A Devereux had come over with the Conqueror; a later one fought for Richard III at Bosworth, but his grandson was a rising man loyal to Henry VIII while the loyalty of Robert’s father, Walter, saw him created Earl of Essex in 1572, though the title came with no commensurate fortune. The next year, indeed, Walter volunteered for the task of crushing the Irish rebellion. But when in 1576 he died at Dublin Castle, the rumour mill was busy.

The symptoms suggest dysentery but Essex himself suspected ‘some evil received in my drink’, and his doctors dosed him with unicorn’s horn, that well-known specific against poison. It was widely rumoured that his wife, Lady Essex, the beautiful Lettice Knollys, had long been having an affair with Robert Dudley, Earl of Leicester, the Queen’s favourite - even that Leicester, rather than Essex, was really the father of Lettice’s son. What can be said with confidence is that after Leicester and Lettice contracted a secret marriage, and their son died as a child in 1584, Leicester came to look on his stepson as in some sense his successor, even his surrogate; keeping the Queen’s favour in a way he himself was increasingly unwilling to do. It was Leicester who brought Essex to court in 1584, arriving in time to break 57 lances, fighting 15 challengers in the Accession Day tilts.

When Leicester led an army to the Netherlands he took the teenager with him, knighting him in the field, but soon it became apparent that Essex’s greatest utility lay in keeping warm Leicester’s place at court. ‘When [the Queen] is abroad, nobody near her but my lord of Essex’, it was soon reported, ‘at night my Lord is at cards, or one game or another with her, that he cometh not to his own lodging till birds sing in the morning.’

When, soon after the Armada victory, Leicester died suddenly, leaving Elizabeth distraught, Essex’s importance increased exponentially - the more so for the fact that as the 1580s turned to the 1590s, the older generation of her favourites and statesmen was passing away. The rest of the Queen’s reign would be dominated by the rifts and rivalries of the Cecils, father and son; Walter Ralegh; and Essex, the Queen’s ‘wild horse’.

But already it was apparent that Essex was ‘full of humours’, resenting his dependence on the ageing Queen even as he demanded authority from her. And his ambition was to be Leicester’s heir not just in court favour but in international affairs - to be the Protestant hero against Philip of Spain. There is no space here fully to chronicle all his hot-headed and abortive ventures, but disaster would follow every foreign expedition Essex undertook; from his unlicensed departure with Drake’s 1589 expedition to the Azores to his 1591 leadership of a military campaign to help the Protestant Henri confirm his claim to the French throne.

Soon Essex was also seeking pre-eminence in internal affairs - what his supporters, the Bacon brothers, called ‘domestical greatness’. By 1593 one courtier reported hopefully that: ‘His Lordship is become a new man, clean forsaking all his former youthful tricks, carrying himself with honourable gravity’. There was, however, little either grave or honourable about his hysterical determination to win the post of Attorney General for Francis Bacon, or his supposed discovery of ‘a most dangerous and desperate treason’ against the Queen, which brought her trusted (and almost certainly innocent) physician, Dr Lopez, to the traitor’s hideous death.

Essex seemed even to be meddling in the dangerous matter of the succession. In 1595 A Conference About the Next Succession to the Crown called upon him to play the kingmaker (or queenmaker) after Elizabeth’s death: no other ‘could have a greater part or sway in the deciding of this great affair’. But his military venture to Cadiz the following year saw him once again snatch defeat from the jaws of victory. He returned to England without the much-needed treasure he had been sent to seize, but, instead, with a popular reputation as a military hero which did him the reverse of service in the Queen’s eyes. Extraordinarily, the so-called ‘Islands Voyage’ the year after that saw him repeat the same vainglorious mistake.

On 1st June 1598, at a meeting of the Privy Council, Elizabeth disregarded Essex’s opinion in the matter of choosing a new governor for Ireland. Losing his temper, in defiance of all etiquette he deliberately turned his back on her. Losing hers in turn, she dealt him a great box around the ears and told him to go and be hanged. Instinctively, he reached for his sword - which, fortunately, stayed in its scabbard as Nottingham seized him. Guards wrestled him out of the chamber, shouting that he would not have taken such an insult even from Elizabeth’s father. It was soon after this that he made his infamous comment: that the Queen’s conditions - dispositions - ‘were as crooked as her carcass’.

Yet it was the perennial problem of Ireland that brought Essex back into prominence once more. The long revolt against English rule had been given a new boost by the dynamic leadership of the Earl of Tyrone. Essex was the obvious choice to command the army sent against him. But this time, to the persistent problems of sickness and supply, of dissent between the commander and Council, was added a new fear… Why was Essex so slow actually to come to grips with Tyrone? Why, in the end, did he meet him, not sword in hand, but to agree a truce for which he by no means had the Queen’s sanction? The reports heard in London raised an unthinkable possibility - that Essex could return to impose his will on England with the support of Tyrone’s Irish army.

The furious letter Elizabeth sent to Ireland was enough to send Essex galloping home without leave, and bursting into her bedchamber at Nonsuch so early that he found her still in a state of undress - and without the paint and the wig, the carapace of jewelled clothes, that allowed her to maintain the ‘Mask of Youth’. Elizabeth kept her composure, and greeted Essex kindly, but successive meetings that day saw a growing chill. Finally, he was dismissed to house arrest; never to see the Queen again.

‘Ambition thwarted in its career doth speedily lead on to madness’, Sir John Harrington wrote of Essex. And the months following that meeting of autumn 1599 made it clear that Essex’s ambitions had indeed been thwarted - that even his chief source of income (a grant from the Queen of the tax on sweet wines) was about to be cut off. But when, before Christmas 1600, Essex melodramatically told King James in Scotland that he was ‘summoned of all sides’ to save his country, to rid the Queen of her evil counsellors, he was tying a noose for his own neck.

The rebellion he launched the following February reads like a saga of incompetence. Essex and his supporters had assumed London would rise for them. London did not. Some twelve hours later saw Essex in the Tower. The result of his trial, less than a fortnight later, was a foregone conclusion: death. Shortly before the 25th of February, orders went out that two headsmen (‘so that if one faint, the other may perform it’), and their ‘bloody tool’ the axe, should be smuggled secretly into the Tower. Histrionically, on the scaffold, Essex blamed himself for his rebellion - ‘this great, this bloody, this crying, this infectious sin’. Seconds later, the third blow of the axe severed his head from his body.