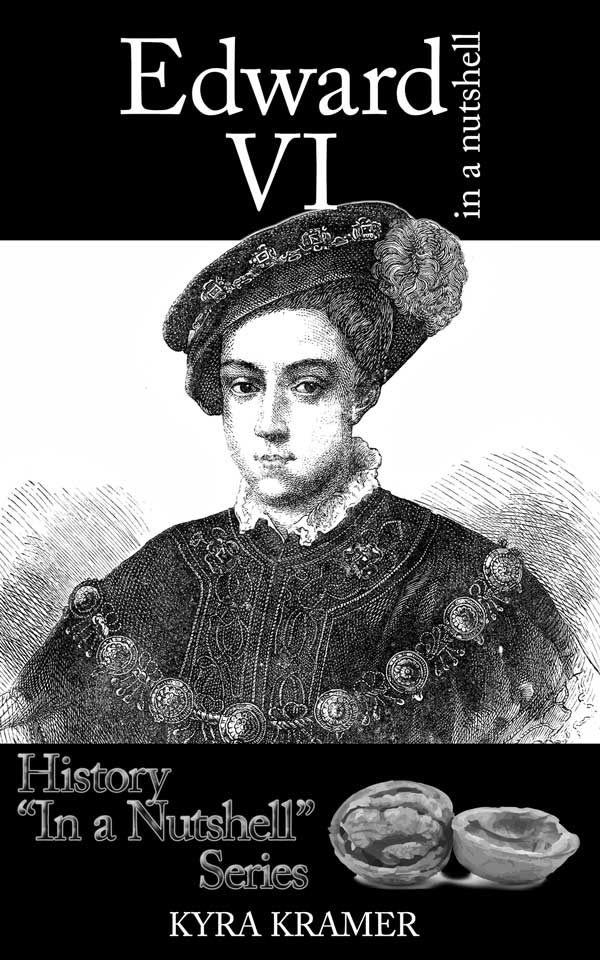 We are delighted to be part of the book tour for Kyra Kramer's new book, 'Edward VI in a Nutshell'.

Kyra Kramer’s book about Henry VIII raised the fascinating topic of hereditary illness and gave some well-argued thoughts as to what might have caused that king’s increasingly erratic and paranoid behaviour. Now Kyra is turning to Henry’s beloved son, Edward. We are looking forward to reading her theory on what illness carried off the young king, just as he was beginning to feel his way as a ruler.

Kyra has prepared an article for Tudor Times on 10 things that you might not know about Edward VI, which you can read here

Edward VI in a Nutshell

Born twenty-seven years into his father's reign, Henry VIII's son, Edward VI, was the answer to a whole country's prayers. Precocious and well-loved, his life should have been idyllic and his own reign long and powerful. Unfortunately for him and for England, that was not to be the case. Crowned King of England at nine years old, Edward was thrust into a world of power players, some who were content to remain behind the throne, and some who would do anything to control it completely. Devoutly Protestant and in possession of an uncanny understanding of his realm, Edward's actions had lasting effects on the religious nature of the kingdom and would surely have triggered even more drastic changes if he hadn't tragically and unexpectedly died at the age of fifteen.

Physicians of the day wrote reams of descriptions of the disease that killed him, but in Edward VI in a Nutshell, medical anthropologist Kyra Kramer (author of Henry VIII's Health in a Nutshell) proposes a new theory of what, exactly, caused his death.

Straightforward and informative, Edward VI in a Nutshell will give readers a better understanding than they've ever had of the life, reign, and death, of England's last child monarch.

Kyra Cornelius Kramer is an author and researcher with undergraduate degrees in both biology and anthropology from the University of Kentucky, as well as a masters degree in medical anthropology from Southern Methodist University. Her work is published in several peer-reviewed journals, including The Historical Journal, Studies in Gothic Fiction, and Journal of Popular Romance Studies and she regularly writes for The Tudor Society. Her books include Blood Will Tell: A medical explanation for the tyranny of Henry VIII, The Jezebel Effect: Why the slut shaming of famous queens still matters, Henry VIII’s Health in a Nutshell and Edward VI in a Nutshell.

To enter the Giveaway for a copy of 'Edward VI in a Nutshell', just leave a comment on our Facebook pag before midnight on Sunday 20th November 2016, telling us which of the 10 facts in Kyra's article you find most interesting.

We will choose a winner at random and contact them via email. This giveaway is open internationally.