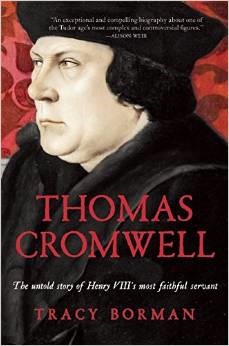 Thomas Cromwell is one of the most controversial figures of the Tudor Court. He is either cast as a villain or as a hero. But as Tracy Borman points out, he was neither. Thomas Cromwell was in actuality a man of many faces. There was the face he chose to project in the work place –a face which he wanted to inspire fear and respect, and the face he kept in public within his closest circle of associates and family, including his protégé Ralph Sadler, his son Gregory, and his nephew who took his last name, Richard Cromwell. He was not devoid of cruelty. It was a dog-eat-dog world after world. The Tudor world was a brutal world, not that different from the period known as the middle ages. Punishments were brutal; attainder, burning, beheading, you take your pick. There was very little chance for men of low birth like Cromwell to rise, but luckily for him Henry VIII was not very interested where a man came as long as they helped him obtain his goals.

The Cromwell that comes alive in these pages is a man who had very little choice in his methods, but who didn’t flinch from using torture to get the King what he wanted. Anne Boleyn in contrast, who has been exalted in fiction, could make demands such as threaten Cromwell in person or indirectly through her almoner and comparing him to the corrupt biblical figure Haman, to give the money gotten from the dissolution of the monasteries to educational projects. Cromwell could not do that, he was a man with no great name, his interests had to coincide with the King’s. And yet he also grew arrogant, Borman demonstrate us. He believed that at the height of his power and with almost all of his enemies obliterated (except Norfolk and Gardiner) he could presume to council the King, and lie right to his face to get him to make an alliance with the Protestant league.

This proved to be a grave mistake. Cromwell’s exaggeration of Anne of Cleves’ beauty proved to be his downfall, as well as the King’s growing distrust of him. The Duke of Norfolk took advantage of this to point his finger at his niece, Katherine Howard whom the King grew infatuated with. He helped the King get his annulment from his unwanted royal bride as before, but unlike before, he was not going to escape his brush with death. Perhaps he knew this, perhaps he sensed the end when he was promoted to the Earl of Essex. It is hard to know, and perhaps we never will. There are so many things about this man that are so contradictory and that is what makes him so fascinating and Borman does a great job retelling his story showing a man who could seem cruel to his rivals, and get generous to his neighbors. A man who rose too high, and whose fall was truly felt by those around him.