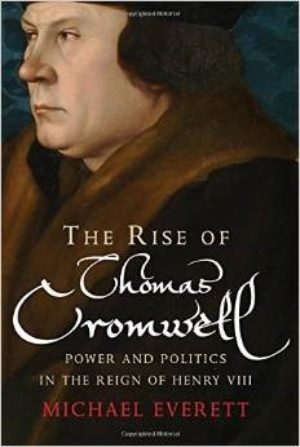 A truly comprehensive study of Cromwell’s early career, both before and after he joined the King’s Privy Council. Ideal for anyone who wants to see a biography built up from the details of daily activities.

When I saw that a new biography had been published of Cromwell, I couldn’t help a groan – I had already immersed myself in several other works for our Person of the Month feature, and I did not want to read the same facts again, in a different format. However, I could not have been more wrong, this book is well worth reading – no matter what you have read on Cromwell, you will find something new here.

Everett has taken a completely new approach, and concentrates on Cromwell’s practical life as a solicitor, conveyancer, surveyor and receiver of rents, first for Wolsey, then for Henry VIII.The basis of Everett’s thesis, is that Cromwell didn’t make an instant leap from nobody to Henry’s right hand man.

His position was built up by proving his capabilities in financial and administrative matters related to Crown revenues and building works, before he began to be involved in political affairs. He did not, as is sometimes claimed, start out with the ambition of replacing Wolsey as the King’s chief minister, rather, his efficiency and dispatch in business made his rise inevitable in a court where the King and the other senior councillors tended to delegate.

Everett is an absolute stickler for proof, nothing that is not documented is asserted, although different perspectives are discussed.

The book makes two points that are well worth considering – first, Everett draws our attention to the risk of assuming that Cromwell’s role was greater than anyone else’s, just because of the mass of documentation that has survived. Cromwell’s papers were seized on his downfall and became part of the Crown archive, and because they are so voluminous, they are relied on extensively. Would a different picture emerge if a similar hoard of papers were discovered, relating to another minister or courtier?

The second point, which emerges from the details that Everett has so painstakingly drawn together, is that Cromwell acted in concert with others, particularly in the early days as a Privy Councillor and he also shows that Cromwell, although influential with the King, certainly did not get everything he wanted. Henry distributed patronage to reflect his own needs – he would listen to Cromwell, but he listened to others, too.

Everett’s style is clear and matter-of-fact. He has obviously spent a huge amount of time and care on collating original sources and reviewing accepted datings of letters and documents. There are no flights of fancy, or attempts to understand people’s inner motivations where there is no evidence – as he says, amongst all of the papers, there is almost nothing relating to Cromwell’s personal life. The sheer quantity of detail means the book drags a little in the middle, but this is an academic study, not a work of popular history, so perhaps some tedium is inevitable.

Although the book is very factual, what I derived from it will influence how I read other biographies in future.Everett demonstrates, although he does not actually articulate the argument, that we have a tendency to read earlier events in the light of later happenings.Thus, because Cromwell became all-powerful earlier biographers infer that he set out with this ambition in mind.Everett avoids this trap by writing forward, rather than with hindsight, giving a much more realistic picture of how life unfolds for most of us – being in the right place at the right time is worth any number of plans.

Next time I read any biography, I will try to erase from my mind any knowledge of the future that will lead to misinterpretation of the present.

Disappointingly, Everett stops in 1534, before the exciting events of the downfall of Anne Boleyn, the Dissolution of the Monasteries, the Pilgrimage of Grace and the Exeter Conspiracy.I sincerely hope he brings out a second volume to cover Cromwell’s involvement in these momentous events.