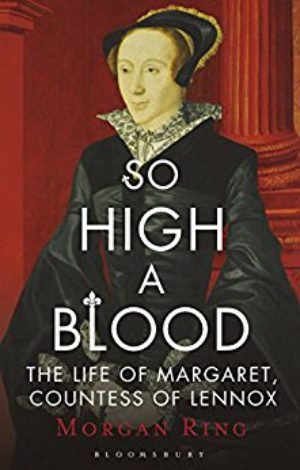 An informative and comprehensive biography of a controversial Tudor woman.

Lady Margaret Douglas is one of the lesser known figures of the Tudor era, which is surprising, as she lived a life full of adventure – smuggled out of her native Scotland as a child, torn between loyalty to her cousin, Princess Mary, and Anne Boleyn, a favourite of her uncle Henry VIII, yet imprisoned by him for betrothing herself in secret, all before the age of 21. The remaining 40 years of her life were equally dramatic.

In this new biography by Morgan Ring, we have not only a thorough examination of Margaret’s life, but also the pleasure of reading a new writer whose clarity of style and smooth prose are a delight.

Without unnecessary speculation about Margaret’s unknowable inner emotions, Ring manages to convey a strong sense of her personality – more flexible of conscience than her cousin Mary, less subtle than her cousin Elizabeth, and with the impulsive streak that she shared with her niece, Mary Queen of Scots.

Margaret lived in a world of spies and espionage and Ring describes very well how she used her ability to gather information to pull off the great coup of her life – the marriage of her son, Lord Darnley, to his cousin, the Queen of Scotland. It is quite clear from the evidence Ring produces that without Margaret’s driving ambition and her ability to talk almost anyone into almost anything, the marriage would never have taken place, and the history of both England and Scotland might have been very different.

The sources are, of course, limited, and there are whole swathes of Margaret’s life of which we can know nothing – the long years in Yorkshire, the day to day life with her husband, the Earl of Lennox, and her real feelings about Elizabeth, with whom she seems to have been on uneasy terms, but whom she still managed to sweet talk into relenting over Lennox’s imprisonment in the early 1560s.

One area where I felt a little more analysis might have been useful was in the treatment of the marriage of Margaret’s second son, Lord Charles Stuart, to Elizabeth Cavendish, daughter of the clever, and rich Bess of Hardwick, Countess of Shrewsbury. Ring appears to take Margaret’s version of the affair as purely a love match, pleaded for by the young couple themselves, but there is some evidence that Margaret had previously discussed it with the Bess, and she can hardly have been unaware of Queen Elizabeth’s likely reaction.

Ring has the gift of conveying an enormous amount of information in a few words, resulting in a book that is comprehensive, but not excessively long. All in all, this is an excellent book – thorough, fast-paced and readable.  Highly recommended.

Tudor Times received a copy of the book for review.