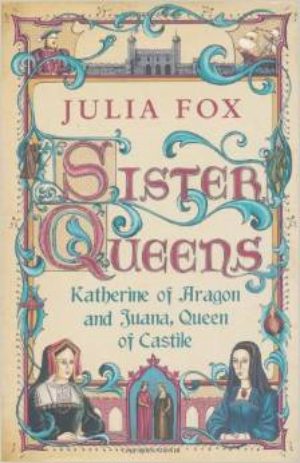 This puts Katharine of Aragon in the context of her birth family and the wider politics of Europe. It also takes a new look at Katharine's sister, Juana Queen of Castile, known to history as Juana the Mad, but perhaps not insane at all. Excellent for both newcomers and those who have read widely on Katharine

I opened this book with some trepidation, having found Fox's previous work on Jane Parker, Lady Rochford, too speculative for my taste. However within a couple of pages I was deeply impressed by the thoughtful appraisal of the evidence about these two sisters: daughters of the Catholic Kings of Spain their destinies encompassed every joy and sorrow, trial and tribulation that royal women of their times could experience.

Fox recreates the atmosphere of their youth, spent following the army that completed the Christian Reconquista of Spain. Given the best early Humanist education available, Juana and Katharine were brought up to believe that a life dedicated to thedefence of the Holy Catholic Church, was a life well spent.

The influence of the religious, crusading spirit of their mother, Isabella of Castile, was equalled by the wily, deceptive and double-crossing political skills of their father, Ferdinand of Aragon, determined above all to prevent French hegemony in Europe.

Thus, only slightly less important than devotion to religion, was the need to dedicate their lives to duty, defined as making successful foreign alliances through marriage and the bearing of heirs, spreading Spanish influence throughout Europe.

Fox then traces the diverging paths of the sisters though marriage, widowhood, childbearing and political machinations. She illustrates, very successfully, how their early training influenced their whole lives, and their reactions to the various misfortunes that befell them. However, as the sisters only met once after Juana left Spain in 1496, and the correspondence between them was minimal, this is really two parallel biographies, rather than an illustration of the relationship between the two women.

Unlike Katharine's, Juana's story is very little known. Aged just seventeen she sailed forth in 1496 to Burgundy to marry Philip, Duke of Burgundy, and son of the Holy Roman Emperor, Maximilian I. Despite an initially passionate marriage, Philip was a domineering bully, who controlled his young wife's every move, dismissing her familiar servants and holding tight to the purse strings. He also flaunted his frequent infidelity. Juana soon displayed all of the attributes of someone bullied - she became emotionally dependent on him, failed to take the opportunity to escape from him her mother offered when the two visited Spain and indulged in histrionic displays of emotion to regain his flagging attention.

This played into his hands as he determined to control her inheritance when she became Queen of Castile in her own right. He insinuated that she was mentally unstable and prevented her from taking her rightful place in the rule of her kingdom. When he died suddenly, her own father, and later her son, continued her subjection and confinement.

Fox presents very clearly the evidence that would lead an objective observer to think that Juana was very badly treated and wrongly deprived of her inheritance. Nevertheless, the lessons of her parents were well-learned. Promotion of the family was more important than any other consideration. When Juana was presented with a possibility of escape during the rebellion of the Communeros, she declined, doing everything in her power to maintain the position of her son, Charles V. He repaid her by continuing her incarceration with a gaoler she hated.

Katharine's fate was less extreme, and she certainly had more personal happiness, at least for part of her life. Her mission in life was to be a means of strengthening ties between Spain and England through her marriage, first to Prince Arthur, and then to his brother Henry VIII. Unfortunately, after many years of matrimony and only one living child, a daughter, Henry VIII wanted to annul their marriage.

This is where Fox undertakes a very detailed analysis and evaluation of the long fight made by Katharine to retain her position, and to uphold what she saw as the right. Fox goes into the arguments both for and against the question of whether Katharine and Arthur's marriage was consummated. Ultimately, she identifies that the matter cannot be proven and that it must rely on the credibility of Katharine herself as a witness. Fox clearly shows that there were strong political motivations that might have caused Katharine to lie, even on oath, but counterbalances that with Queen's integrity and adherence to her faith.

Fox does all this with an understated wit that is most enjoyable. Favourite line: "Henry [VII] was practically on first name terms with every coin in his treasury."