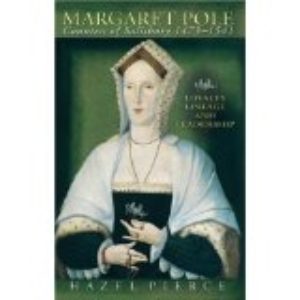 This is an excellent, well-researched academic study of the life of Margaret, Countess of Salisbury. Particularly suitable for readers who have good knowledge of the wider events of the period and want detailed information about Margaret.

Pierce's work concentrates on placing Margaret into the context of her time, first in her traditional role of daughter, niece and wife, but then in the very unusual context of Margaret as a great landowner, wielding the level of power and patronage normally reserved for men.

The author's great skill is in exploring the contemporary records to create a portrait of Margaret that shows her as an essentially mediaeval figure – believing, first in her duty to God, then to the King, but, only just behind her allegiance to the monarch, her duty to promote her family's wealth and position to the utmost extent of her ability.

Pierce has delved extensively into Margaret's management of her estates, and demonstrates that, whilst her situation as a Countess in her own right was unusual, Margaret had no hesitation in behaving in exactly the same way as her male counterparts - often ruthless and even unscrupulous, in her determination to wring the last drop from every bargain. The treatment of her widowed daughter-in-law is shown to be particularly unsavoury - Jane Lewknor was strong-armed by Margaret and Margaret's eldest son, Lord Montague, into taking a vow of chastity within weeks of her husband, Arthur Pole's death, to protect the inheritance of Arthur's children

Margaret's determination is not specifically used to advance any issues of gender politics, however it is apparent that, regardless of any convention of the time about the weakness and inferiority of women, Margaret was not going to tolerate a position as a mild and dutiful ornament. She knew her rights, and she demanded them, whilst still conforming to a mediaeval pattern of feminine chastity and conventional piety.

The relationship between Margaret and her god-daughter, Princess Mary, and her efforts to shield Mary from the worst effects of Henry VIII's annulment suit are given a very human touch, without the author making any claims that can't be substantiated by records.

Margaret's terrible death at the hands of an unskilled headsman have added to the picture of her as a martyr for her faith, but Pierce's forensic analysis of the Exeter conspiracy shows quite clearly that Margaret was innocent of any plot (no matter how vague or insubstantial it might have been) to overthrow Henry and the Royal Supremacy. Whilst it may not quite accord with the picture of her as halfway to sainthood (Margaret was beatified by the Roman Catholic Church in 1886) it makes the injustice of her execution even more outrageous.

I would love to meet the Margaret that Hazel Pierce has revealed – but I wouldn't want to try to cheat her of her rights!