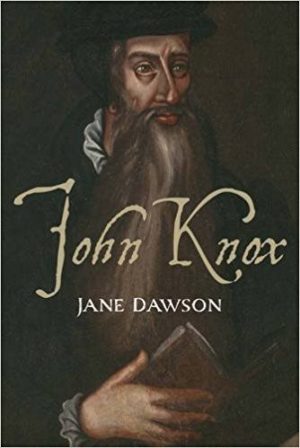 A scholarly, yet readable, account of Knox, which is balanced and informative.

Knox is a hard man for a twenty-first century Western audience to like – especially women. His unremitting belief in his own righteousness, his fulminations against women rulers, his argumentative and divisive speeches and writings make him easy to satirise, yet Professor Dawson’s biography is a far more sophisticated and nuanced study of his life. This has been helped by the fascinating new material recently discovered, relating to Knox and his colleague, Christopher Goodman.

The biography opens with an account of the christening of Knox’s son into the exiled English congregation in Geneva. By opening with this picture of Knox in family mode, Dawson immediately humanises him. What we discover from the book, is that Knox was a deeply emotional man – attached to his friends and family, and very much inclined to displays of weeping and laughter.

Having established that Knox was a more rounded character than we may give him credit for, Dawson then returns to the conventional pattern of biography as chronological narrative, starting with the little that is known of Knox’s birth and childhood. An important thread of Knox’s outlook is drawn out in these early chapters – the reliance he placed all his life on the bonds of kinship and ‘kindness’ in the sense of duty to kin.

We follow Knox on his traditional trajectory of school, university and ordination as a Catholic priest (not something he talked about later in life!). What his early training soon identified, was that Knox was a natural orator – in love with the sound of his own words and with the ability to move the hearts, as well as the minds, of his listeners.

Dawson explains the complex political background of Scottish politics clearly, and we can see how Knox, and the other fledgling Protestants, fitted into a country that was torn, not just by Catholic tradition and burgeoning Protestant ideology, but also between pro-English and pro-French factions in government. Knox was caught up in this factional struggle, and became a devoted adherent of the pro-English, Protestant group.

The narrative carries Knox smoothly through his time in the French galleys and places him in England, where we learn more about his life as a Protestant minister during the increasingly radical Reformation under Edward VI. But Knox was no government puppet and Dawson shows him clashing with Archbishop Cranmer, unafraid to criticise the primate’s slow pace of reform.

We also learn about Knox’s wide circle of female friends. He undoubtedly saw women as unfit to rule, but in his personal friendships, and in his role as a minister, he had warm and supportive relationships with women.

The controversies of Knox’s time in Frankfurt are covered – it is a complex tale, and difficult to simplify, but Dawson keeps her audience with her through the machinations of the Knoxians and Coxians.

With his return to Scotland, and the death of the Catholic regent, the political situation became even more tense. Knox, having seen Protestantism implemented as the state religion, was disappointed to find the that Protestant lords were not saints. Dawson describes very well how Knox, with his black-and-white construction of life, struggled to deal with what he saw as half-measures. His inability to see any good in Mary, Queen of Scots probably contributed to her downfall, and his vehemence against her made any compromise impossible.

Dawson’s biography is an extremely valuable contribution to understanding Scottish politics in the mid-sixteenth century. Her portrait of Knox, although not unduly sympathetic, shows the whole man, not just the eloquent preacher, or the avenging fury, denouncing Queen Mary from the pulpit.