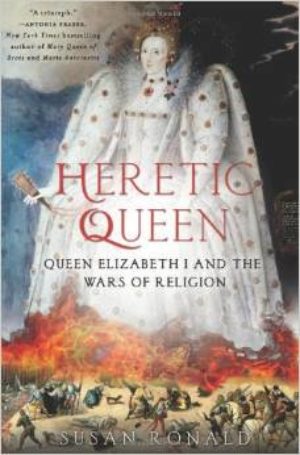 An excellent book for the political aspects, not quite so good on the underlying religious issues.

There are many excellent aspects to this book. Susan Ronald has researched the international politics thoroughly and really puts Elizabeth and English politics into a European context, which so many writers fail to do. In particular, she shines a light on the complex relationships with France and Spain - both keen to see Roman Catholicism re-imposed (or, depending on your viewpoint, restored) in England, but each willing to treat with the England to prevent the other gaining the upper hand in Europe.

Elizabeth is shown weaving her way between the extremes of the blind papal obedience that had effectively destroyed her sister's reputation, and the increasing pressure from the Puritans who wished to emulate the theocracy of Geneva. At the same time, she had to bring along a population that, outside the capital and perhaps Kent and East Anglia, remained fundamentally Catholic - certainly for the first decade of her reign - and resented the disappearance of the Saints' Days, the processions that gave interest to lives that were hard and lacked variety, and the centuries-old traditions of the countryside.

Elizabeth, constantly undermined by her councillors plotting in her “best interests", whilst she fought to keep the various factions balanced, emerges as resourceful, flexible and quick thinking. She is perhaps portrayed as a little more inclined to the modern doctrine of religious tolerance than is quite realistic in the mind of a sixteenth century queen.

Unfortunately, whilst the political research is excellent, Ms Ronald makes a couple of fundamental errors in explaining some of the underlying religious controversy. The first serious error, is in her reference to the inclusion of "communion in both kinds" as part of the religious settlement of Elizabeth's first parliament. She explains this as Communion being given to both Catholics and Protestants. In fact it is something quite different. The mediaeval Church celebrated Mass by giving the consecrated bread to the congregation, and both bread and wine to the priest. The demand for the congregation also to receive the wine (ie to take the Sacrament “in both kinds") was one of the main demands of the early evangelicals in the 1510s and 1520s.

The second example is her reference to the Puritans worrying that the English people would spend a long time in purgatory if they did not throw off Catholic superstition. In fact the whole doctrine of the existence of purgatory was absolute anathema to all Protestants, not just the Puritans, and had been thrown off in the early years of the Reformation.

These and similar errors are a pity - they would not really matter, if the underlying theme were not about the religious issues of the time. Nevertheless, the book is well-written, impressively detailed and most informative.