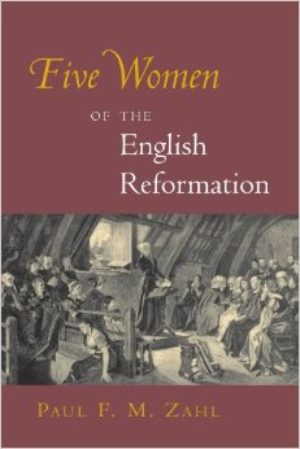 An interesting perspective on the religious experience aspect, rather than a scholarly intellectual account.

The author of this short work states clearly that he is not a historian. That much may quickly be gathered from the frequent errors of fact that litter the book and the quotations from single sources with no contrary opinions offered. However, Dr Zahl's justification for writing the work - that his own Christian faith enables him to understand the motivations of these women in a way that a non-believer cannot - has a certain truth to it.

His certainty that his interpretation of Christianity (Presbyterian Protestantism) is necessarily true and that other interpretations are simply wrong, reflects the attitudes of sixteenth century England (and perhaps, sections of twenty-first century US) in a way that modern British people find very hard to understand or feel sympathy with.

His exposition of the three phases of the Reformation - the first, concentrating on justification by Faith, rather than Works, important to the beliefs of Anne Boleyn and Katherine Parr; the second, centred on the rejection of the doctrine of transubstantiation, at the heart of the faith of Anne Askew and Jane Grey; and the third, the development of the ideas of predestination and election that characterised Katherine Willoughby's thoughts, is well expressed.

The reader feels throughout his sympathy and admiration for all of the women, particularly for Askew and Grey, who both came to terrible ends. Indeed his rather strange and romantic (in the non-sexual sense) adoration of Jane Grey is slightly disturbing.

His use of the women's own writings, where extant, lends support to his arguments, and the inclusion of excerpts at the end from the actual texts is helpful. Less helpful, although perhaps suited to his target audience (which is probably not me) is the use of modern American political parallels and quotes from films as analogies. Apart from anything else, this will date the work.

Mistakes of fact include, but sadly are not limited to, Katherine Parr's birth date, Henry VIII's will provisions, and Anne Askew's relationship with Katherine Parr. She was not one of the Queen's ladies in waiting. Nevertheless, I learnt something, and had a new point of view presented which is always welcome.