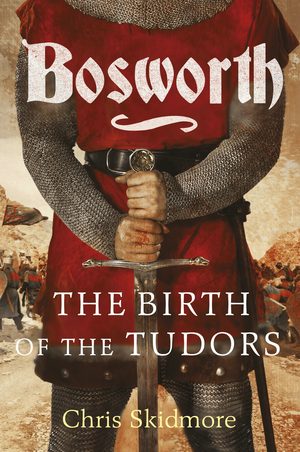 A gripping account of the battle that brought the Tudors to the throne of England – ideal for readers who appreciate detail and non-partisan reflection.

This is a superb account of the battle, beginning some 60 years earlier as the seeds of the Wars of the Roses were sown in Henry VI's incapacity for his great office, and carrying the reader along in a well-researched and detailed narrative that never flags.

This is the most even handed account of the wars I have read. Whilst it concentrates in the early part on the perspectives of Edmund and Jasper Tudor, Henry VII's father and uncle, and natural Lancastrians, it shows how hard it was for the nobles to cope with a weak king and a queen who, though clever and brave, was not always wise, and was often partisan.

An interesting throwaway comment sheds light on why London became such a strong supporter of the Yorkists: Queen Margaret made her head of operations in the Midlands, based round Coventry. This made sense as her jointure lands were concentrated here, but the removal of the Court damaged London's economy and led the city to support York.

Undoubtedly, the majority of the nobility supported Lancaster. Even at Towton, the bloodiest battle of them all that set the seal on Edward of York's claim to be king, 19 nobles fought for Henry VI, but only 8 for Edward. However, loyalty was not enough for victory. Edward emerged triumphant from a field of some 28,000 dead and began immediately to show what a vigorous and talented man could do.

Edward was a canny and subtle man, with that greatest of kingly attributes - charisma. He was also completely ruthless where necessary, (the murder of Henry VI has to be laid at his door) but he was inclined to seek conciliation where possible, and rise above the factionalism that had brought down Lancaster. But the higher the ride, the greater the fall. The house of York, having won the crown, proceeded to tear itself apart on Edward's untimely death.

The book takes us well through the minefield of the politics, although we occasionally have a little too much detail about how much Margaret Beaufort paid for horse feed, firewood and ferry crossings. The author also makes clear the wider European ramifications of the wars. The readeption of Henry VI in 1471 ultimately failed because the cost of French support was war against Burgundy, dismaying the London merchants and forcing Charles of Burgundy, who had previously refused to have any truck with his exiled brother-in-law, Edward IV, to provide him with money and men for a last ditch attempt to regain the throne.

And so we come to the battle itself, with its intricate plots and conspiracies between Henry and the Stanleys, and Richard and his supporters, and the treachery hinted at by the ominous warning to John Howard, Duke of Norfolk:

"Jack of Norfolk, be not too bold, for Dickon thy master, is bought and sold."

Skidmore describes the charges and counter-charges and the strategies and tactics of late mediaeval warfare in some detail, but the interest never flags.

By the end, I knew considerably more about the politics and the practicalities of warfare then previously, and every conceivable detail about Bosworth, its causes and its aftermath.