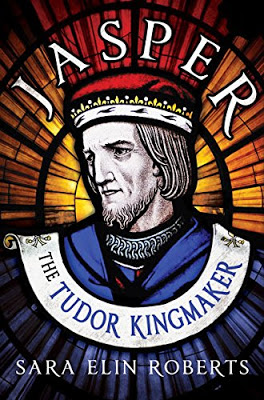 Welsh academic and author Dr Sara Elin Roberts has produced a fascinating and detailed account of the life of Sir Jasper Tudor, Earl of Pembroke, Duke of Bedford, who was second son of Owen Tudor and the widowed queen Catherine of Valois. It was with Jasper's support that King Henry VII returned from exile to defeat Richard III at the Battle of Bosworth, leading to the establishment of the Tudor dynasty, yet Jasper has become what Dr Roberts calls ‘the forgotten kingmaker:’

‘Jasper was central to the world of the Wars of the Roses. He was, at different times, a key player in the unfolding, political game: a warrior in battles; a rebel fighter; a threat to the crown and the powers running the country; a potential claimant to the throne; and an exile.’

Although this is an academic study of Jasper’s life, I found it highly readable with a strong narrative thread. Dr Roberts draws from a wealth of contemporary sources from England, Wales and France, several of which were new to me, referenced in twenty-seven pages of endnotes. The book also has thirty colour illustrations and an informative appendix on the Welsh poetry and contemporary law texts which still survive. As well as providing a documented account of the events of the key people and events, the Welsh poems allow an often colourful insight into the late medieval period.

Highly recommended to anyone with an interest in understanding the world of the early Tudors.