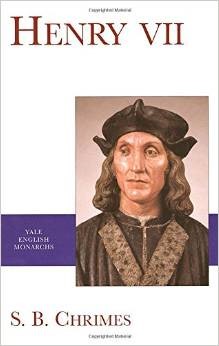 As historians, we are lucky to have a selection of biographies on English kings published by the Yale University Press called “The English Monarchs Series”. For over thirty years, the biographies, written by eminently qualified historians, have given us the latest research on these important figures in history. S.B. Chrimes, born in 1907, was head of the department of history at University College, Cardiff, the University of Wales, from 1953 to 1974. This biography of Henry Tudor was first published in Britain in 1972 by a British publisher. A paperback edition was issued in 1977 and Yale University Press published their edition in 1999 with a new forward by George Bernard, reader in Tudor history at the University of Southampton.

Bernard’s forward essentially updates the research done by Chrimes since the original publishing of the work in 1972. For the most part he states the work is still valid with a few revisions based on new research. The earliest works on Henry were from James Gairdner and Wilhelm Busch from the 1890’s so Henry was definitely due for a fresher look. Chrimes is quick to point out the biography of Henry VII’s life from Sir Francis Bacon (1561-1626) should be taken with a grain of salt and refutes several of Bacon’s arguments.

Part one of this book gives us an overview of Henry’s life up to the Battle of Bosworth in August of 1485.This is followed by a chapter on his accession, coronation, marriage and family.Next he covers the issue of security which Henry dealt with for the rest of his reign.Chrimes recounts the uprisings and pretenders who haunted Henry for many years of his reign.This section of the book is very interesting.

The rest of the book gives us many details on Henry’s reign based on meticulous research by Chrimes and others. Part two of the book is entitled “The Personnel and Machinery of Government” with sections on the King Council, Seals and Secretariats, Financial Administration, Parliaments and Great Councils and Judicature. While this section is very informative, some may find the material dry and uninteresting. If you are a Tudor historian, you will learn a lot about the workings of early Tudor government.

Part three is entitled “Statecraft”.This section deals with law-making, law enforcement, fiscal and financial policy, economic and social policy, relations with the church, Henry’s policies toward Wales and Ireland and his handling of foreign policies.Again, some of this information may appear dry but I found the chapters on Wales and Ireland and Henry’s foreign policy to be very appealing.It was especially interesting to read about how Henry made overtures to find a wife after his queen, Elizabeth of York died in 1503 and how this impacted his foreign policy.For most of his reign he lobbied for a diplomatic and trade alliance with the Holy Roman Emperor and sought to marry Margaret of Austria, Duchess of Savoy and Regent of the Netherlands.Ultimately, Margaret refused to marry him.

Chrimes addresses the viewpoints that Henry was rapacious and miserly. He basically argues yes and no to both. One item of interest is he refutes Francis Bacon’s statement that when Henry died he left a fortune of two million pounds. He says this isn’t true and that most of what remained in the treasury was precious items and jewels, Henry’s favorite investments. There is a diverse selection of appendices in the book and a myriad of great photos.There is a valuable bibliography and a nice selection of family trees as well. This book is an excellent and reliable overview of King Henry VII’s life and reign and I highly recommend it to lovers of Tudor history.