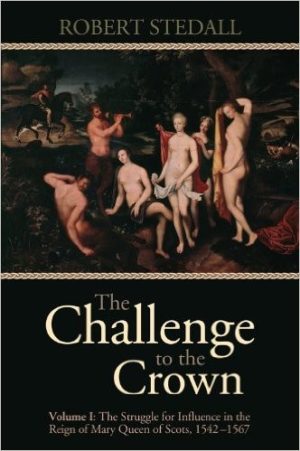 A detailed analysis of the plots, and counterplots, that characterised the reign of Mary, Queen of Scots, with credible insight into the complex motivations of those involved.

Mr Stedall did not begin his career as a professional historian, but that does not handicap his ability to pick his way through the complex politics at the court of Mary, Queen of Scots. He begins the narrative with a description of the situation in Scotland in the early 1540s – the King dead, the struggle for the regency, and the looming threat of England.

He then carries us into France with the little queen, sent there for safety aged five. Stedall covers Mary’s childhood and education in some detail. There is useful information about the politics of France, peppered with some of the more scandalous details of the French courts’ love affairs, and background about Catherine de Medici.

He examines the political implications to Scotland of the marriage of Mary to the Dauphin, and that the ceding of the Crown Matrimonial to François meant that Mary’s natural heir, the Duke of Chatelherault and his son the Earl of Arran, were given a reason to join the Lords of the Congregation in their opposition to the regency of Mary’s mother. As Mary grew to adulthood in France, Scotland’s elite, with the exception of her mother, the Queen-Regent, were turning away from the Auld Alliance with Catholic France, and seeking to join in common cause with Protestant England.

Stedwall gives an excellent summary of the position in Scotland and the alignment of the various factions on Mary’s return from France as a widow. He makes it clear that combination in factions was not just a religious matter. The Catholic Huntly and the Protestant Bothwell were both opposed to the Protestant Moray, who was pro an alliance with England. Stedall, unlike many other writers, believes that Moray always entertained ambitions to snatch his half-sister’s throne, but was willing to content himself with being her chief advisor, until the advent of her second husband, Lord Darnley.

In describing her reign, Stedall concludes that Mary, whilst clever and astute in many ways, and adept at gathering personal support ‘showed political naivety and a misjudgement of people’. He also convincingly demonstrates that her marriage to Darnley was a headstrong act, undertaken almost entirely without support from any of her nobles and saddled her with a fatal liability.

Stedall takes a different approach to the murder of Rizzio, from that espoused by John Guy in ‘My Heart is My Own’. It is Stedall’s contention that Darnley intended Mary and their unborn child to die after the shock of witnessing the murder, with the goal of claiming the crown himself, through his own Stewart blood (although the Duke of Chatelherault was widely accepted as the next heir).

The narrative of Darnley’s death is complex, as the subject itself is complex. Stedall’s view is that Mary was innocent of the murder, and the whole plot was masterminded by Moray from start to finish, with Bothwell being manipulated into thinking it his own idea, and actually arranging it. Mary is shown as walking into the trap of appearing to be complicit in the murder of Darnley and her apparent abduction, by being too shamed by having slept with Bothwell (whether willingly or not) to refuse to marry him. Stedall concludes, however, that Mary’s own failure to listen to sensible advice, and her stupidity in marrying Bothwell, despite it being evident that he had been involved in Darnley’s murder, were the ultimate causes of her downfall.

This first volume in a two-volume work ends with Mary’s deposition and Moray’s acceptance as Regent.

Stendall’s style is readable, and I received the impression that he knew the details of his subject well. Where the writer’s inexperience perhaps shows is in a few places where the narrative becomes confused. Occasionally, lots of pronouns rather than names mean it is unclear exactly who was doing what to whom – the tendency of all the participants in the politics of the 1550s and 156os to change sides and betray each other making it difficult to infer the idenities from the context.

Annoyingly, the kindle version of the book has jumbled footnotes that merge into the text.