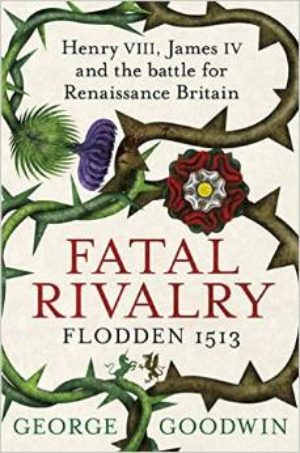 An excellent retelling of this seminal battle in the Anglo-Scottish wars which will interest a far wider audience than just those interested in military history.

Books about military campaigns are often hard to follow as armies march hither and thither in terrain that may have changed out of all recognition since the event. Goodwin's writing style, however, is so fluid and fluent that the reader has no trouble at all finding out what happened at this most traumatic of battles. The book is not just a dry account of a battle, but describes in detail the personalities of the men (and women) involved, giving details of their courts, and their parallel approaches to displaying their wealth and power.

One of the best aspects of Goodwin's work is the firm placing of the battle of Flodden in its European context. Usually, the battle is only considered as another round in the endless Anglo-Scottish wars, but, in fact, it can be seen as one of the components of the War of the League of Cambrai.

The account opens with the succession of James VI to the English throne, some ninety years after the battle itself. It then backtracks to the early years of the reign of the Scottish King James IV, and examines the relationships between him, and, first, Henry VII, then Henry VIII of England.

Both James IV and Henry VII won their crowns in battle. Unlike the majority of renaissance princes, Henry was not naturally warlike, although he proved himself competent in war as in everything else. James, on the other hand, was keen to unite his factious nobles in the time-honoured way of annoying his southern neighbours. He therefore began the first of his three Border campaigns through support of the imposter, Perkin Warbeck, who claimed to have a better right to the English throne than Henry VII. Goodwin covers the wider diplomatic ambitions of James to be recognised as a player on the European stage by such illustrious monarchs as the Holy Roman Emperor, Maximilian I, and the Catholic Kings of Spain.

Having dealt with the diplomatic aspects, James followed up with a quick and very successful campaign in Northumberland, that, handily for a monarch who was not overburdened with wealth, paid for itself.

Henry VII, seriously alarmed by James' success, overreacted to a degree that almost cost him his throne. He raised such a huge army to counteract the Scottish threat that the necessary taxation led to rebellion in Cornwall. The peril was so great the Henry was obliged to send his family to the Tower of London and was quite unable to lead an army north.

Always quick to learn, Henry decided on a different strategy to deal with his northern neighbours and sent a senior member of his council, Bishop Richard Fox of Durham, to negotiate. Keen to prove that he had the upper hand, James promptly besieged Fox in Norham Castle! Backup arrived for Fox in the shape of the Earl of Surrey but after a little skirmishing, James emerged the victor.

James could now negotiate from a position of strength, and Goodwin describes the various complexities surrounding agreeing a peace between two countries that each had factions opposing a settlement. Also in the mix was a third group in the shape of the Border Reivers who had no interest in the rule of law being imposed by either king.

The long term treaty eventually signed was the Treaty of Perpetual Peace which was to be cemented by the marriage of Henry VII's daughter, Margaret, to James IV in 1503. Again, Goodwin explains all of the ramifications of the treaty in depth, whilst retaining the reader's interest.

This leads us into the meat of the book – the early sea skirmishes, the arguments over Henry VII's bequest to his daughter, Margaret, Queen of Scots that was withheld, the blandishments of the French King in his quest to encourage James to remember the older treaty with France rather than the Treaty of Perpetual Peace, and finally, the desire of both kings to prove themselves in war.

Goodwin describes the preparations for military action, the increasingly belligerent war of words in 1511-1513, and finally, the campaign itself. Despite knowing the outcome of the battle, its depiction is nail-bitingly suspenseful as the moves and countermoves of James and his opponent across Northumberland are retold, the relative strengths of the two armies measured, and the final result explained.