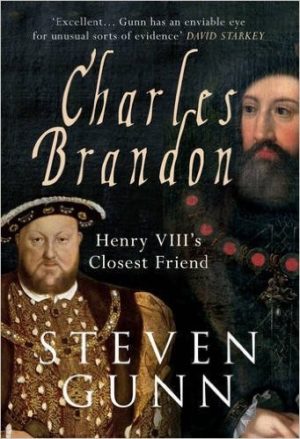 A meticulous account of one of the few friends Henry VIII had whom he never turned against.

Many books that purport to be about the friends and family of the Tudors are really just another book about the monarchs themselves, often because there is little real information about anyone other than the sovereigns. This book, however, does exactly what it says on the very attractive jacket. It concentrates entirely on the life of Charles Brandon, Duke of Suffolk, the man who was Henry’s friend, jousting companion and brother-in-law.

Professor Gunn is a serious historian, and this is a serious book. It focuses on the financial and legal minutiae of Suffolk’s life: the offices he held and the fees received; the fines he paid for his disobedient marriage to Mary, the French Queen; the names and incomes of the affinity that he sought to build in East Anglia; and the mortgages and bonds he took to control the spendthrift ways of his son-in-law, Lord Monteagle.

It mentions Suffolk’s marital complications – four wives, an annulment followed by a remarriage, marriage to a Queen, and to his fourteen year old ward, and his children, legitimate, illegitimate and possibly legitimate. However, it covers all this as an assemblage of facts. There is no interpretation of any of the personal or emotional aspects of his life.

I am in two minds about this: when there is no evidence from personal letters or commentary, I am always very wary of authors speculating about the inner emotions of their subjects, but for there to be absolutely no comment at all on Suffolk’s emotional or private life seems oddly cold.There is no commentary on what might have been at the root of his friendship with Henry, it is easy to gain the impression that Suffolk was just more skilled at handling the king than some of the other courtiers, and yet that does not seem entirely satisfactory as an answer. Even the statement that Anne Boleyn accused Suffolk of molesting his own daughter is just slipped in without gloss. Was this the cause or the result of the apparent dislike between Anne and Suffolk?

Yet I feel that Professor Gunn does have an emotional connection with Suffolk, that he is perhaps trying to restrain, lest he over-embellish. Occasionally, I formed the impression that Suffolk was just not the sharpest knife in the drawer, but that he was doing his best to live up to the expectations of society – he came from a comfortable, but not wealthy gentry family and shot up to become the third man in the land, after the King, preceded only by the Dukes of Buckingham and Norfolk.

A very enlightening and interesting aspect of the book was the information about Suffolk’s relationships with Henry’s other ministers – Wolsey, Cromwell, and particularly, Norfolk. Professor Gunn shows clearly how the men had to work together to deliver policy, whilst attempting to build up their own affinities.

In all, a book for a reader who has a good knowledge of the politics of Henry’s reign, who would like some really meaty facts about the day to day experience of ministers and noblemen in managing their business affairs.

Tudor Times received a review copy of the book.