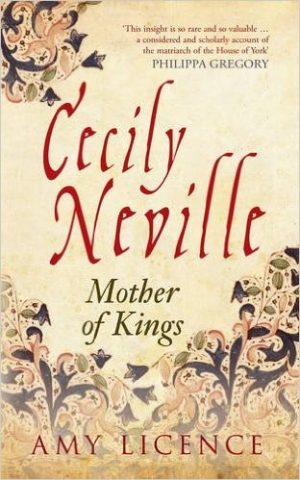 A thorough analysis of the life of Cecily Neville, giving an all-round picture of her as wife, mother, Duchess and ‘queen-by-rights’.

It is often the case in biographies of people, the events of whose lives are interesting, but for whom there are few contemporary or personal records, that the author spends a good deal of time in speculation – ‘Cecily must have thought this’, or ‘felt that’. Amy Licence very largely avoids this tendency and has created a biography that is convincing, but not over-coloured by modern perceptions.

In the introduction, Ms Licence is very clear that there is a paucity of actual records relating to Cecily Neville, Duchess of York, so she uses the sources to create a rich and informative context to the Duchess’ life that allows the reader to understand the milieu in which she lived, the experiences that her friends and contemporaries would have had and the philosophical framework which shaped the mediaeval perception of life. From this, we can build our own picture without ever being subjected to the author’s personal views.

The book contains a huge wealth of meticulously researched material about the day-to-day life of the Duke and Duchess of York: their servants’ names and wages, their peregrinations around the vast York estates, their life as Governors of Normandy in a time of war.

It is hard to view any of the protagonists of the Wars of the Roses without the benefit of one’s own predilection for Lancaster or York, but Licence details the increasing alienation from the centre of power that the Duke of York felt in a matter-of-fact, rather than partisan tone. Whether he was entitled to feel it, or whether he was making assumptions about the role he ought to have that the King was free to accept or reject, depends upon one’s own viewpoint.

One of Ms Licence’s great areas of study, explored in many of her other works, is the experience of mediaeval and early-modern women in childbirth and the rearing of their families. She uses this knowledge to great effect to sketch in the relationships that occurred behind the scenes – such as that between Cecily Neville and her husband’s arch-enemy, Queen Marguerite of Anjou. Divided as they were by the ambition of Cecily’s husband and the chronic ineffectualness and mental instability of Marguerite’s spouse, Henry VI, yet they still shared many of their life experiences – the length of time it took either of them to produce a first child being one.

There are two areas of controversy in Cecily’s life – the first is the idea that her eldest son, Edward IV, was illegitimate. Ms Licence begins by demonstrating clearly that the oft-cited statement that the Duke of York was at a place some 50 miles away from Cecily at the time of the conception cannot be used to prove illegitimacy.

She refutes the notion on two counts – first, that gestation periods differ from some 37 to 42 weeks in normal, healthy women, and given that window the couple could easily have met. It is apparent from the evidence that the Duke and Duchess were happily married, and that she frequently made efforts to join him as he went about official business. Second, the inferences that can be drawn from the evidence about Cecily’s own character. From the evidence, the Duchess was a woman who gloried in her high status, and was also deeply religious and conventional in her outlook. Is it likely that such a woman would have slept with an archer? In fact, it is hard to believe that Cecily Neville would ever have even spoken to someone so far beneath her rank.

Later, however, Ms Licence seems to draw back from this position and suggest that Cecily herself allowed people to think there was truth in the rumour.

The second area of controversy is, of course, the fate of Cecily’s grandsons, the ‘Princes in the Tower’. Ms Licence is careful not to opine on their actual fate. She does, however, discuss what Cecily’s attitude might have been to the usurpation of her grandson’s crown by her son.

Whilst the essence of Cecily cannot be recreated five hundred years after her death, Ms Licence enables us to catch a glimpse of an embroidered train, or a veiled hennin whisking away down a stone corridor ahead of us – a tantalising figure, whom we can almost, but not quite, grasp.

We received a revew copy of this book from the publisher.