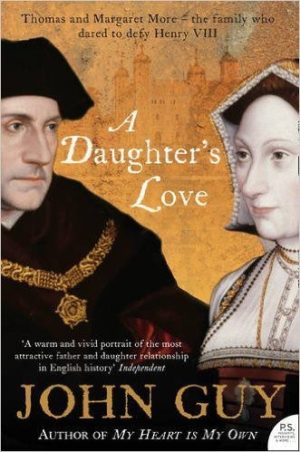 A warm, yet rigorous, account of Sir Thomas More in the context of his family.

Over the centuries most biographies of Thomas More present him as either saint or fanatic, or, for those who are less interested in religious controversy, as a man of principle, working hard to deliver royal policy.

This book, although of course it covers More’s public life, concentrates on him in the context of his family. It is a joint biography of More and his daughter Margaret, or Meg as he called her, and their relationship is at the heart of the book. Guy also delves much more into the parallel lives of the rest of More’s family, showing how the relationship, once warm, between More and his brother-in-law, John Rastell, broke down, even though Rastell had published Utopia.

We often think of Tudor parents as distant from their children, but nothing could be further from the truth in More’s case and John Guy explores him both as a devoted son and a loving father. He also covers many of the day to day details of the More family’s domestic life, allowing us to see behind the famous portrait that Holbein made of the family in 1527, not long before More was to reach the apogee of his political career, as Lord Chancellor. More’s fondness for his gardens, and the simple pleasures he enjoyed, add to the picture of domesticity.

Margaret More (or Roper, to give her her married name) was a remarkable woman in her own right and John Guy shows how More’s revolutionary theories about female education not only gave Margaret the opportunity for her intellect to flourish, but set the standard for the remarkably well-educated women of the mid-Tudor period. Henry VIII’s daughters, Mary and Elizabeth, and their cousin Lady Jane Grey, were just three of the women who benefited.

But of course, the story of More will also focus on the last years of his life, which for modern readers present such a paradox – vigorous persecution of those whom he saw as ‘heretics’ juxtaposed with his own willingness to die for his beliefs. Guy is able to explain More’s thinking, whilst starkly laying out the truth of his actions against heretics, and showing how it largely cost him his friendship with Erasmus, who could not believe More’s actions.

No matter how many biographies one reads about More, the man remains elusive – cruel to heretics, but kind and just in every other aspect of his life. A stickler for order and authority, whilst a man of great wit and humour; a man who considered the cloister, but chose to marry not just once, but twice. Guy’s book, concise, readable and soaked in his deep knowledge of the period, is one of the best, and has the added bonus of presenting Margaret More as well – a woman who was a good enough scholar to correct Erasmus himself.