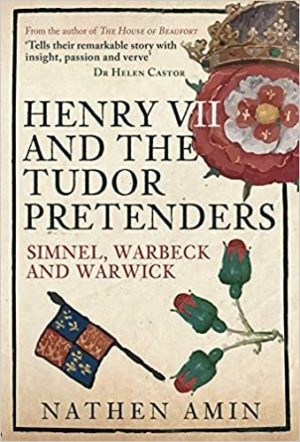 This is Amin’s third history book and he has matured wonderfully as a writer – this work elegantly mixes detailed analysis with a strategic view of the national and international politics of Henry VII’s reign.

To my knowledge, this is the first book that focuses on the three most dangerous attempts to unseat Henry VII’s reign, beginning with the Simnel affair, progressing through the long Warbeck troubles and culminating in the execution of Warbeck and Warwick in 1499. The final chapter touches on the activities of Edmund de la Pole, the ‘White Rose’, but does not go into details. Amin has amassed a wealth of detail about these rebellions – an interesting discovery for me was the response of the city of York to the Lambert Simnel impersonation of Edward, Earl of Warwick. Contrary to what might have been expected, given that York is often supposed to have been especially devoted to Richard III and might have been thought likely to support a supposed scion of his family, the city did not waiver in its support for Henry VII and Amin has the detailed records of the city to prove this.

He uses the detail to show how Henry had learnt from mistakes made by his predecessors during the Wars of the Roses, for example taking his army north to minimise the length of time the Simnel invaders had to gather support, contrasting this with what Amin contends was an error on the part of Richard III – allowing Henry to penetrate deeply into the realm before Bosworth. Looking further back, Amin contrasts Henry’s care to ensure that his army was orderly and well-disciplined, with the failure to manage the Lancastrian army that had cost Marguerite of Anjou ultimate victory when London had barred its gates to her ill-disciplined troops.

Simnel was more easily dispatched than the next pretender, known to history as Perkin Warbeck – although, just possibly, Richard, Duke of York, younger of Edward IV’s missing sons. Amin goes into some detail about the young man’s possible background, comparing the various stories circulated both before and after his capture. Amin believes the man to have been an imposter, but he gives the evidence for both sides.

Ultimately, of course, it does not really matter who the boy was, in that he could not command sufficient support to overthrow Henry VII, which is part of the core argument of the book – that rebellions were not just national affairs. Amin looks not just at the situation in England that gave rise to the Warbeck insurrection, but explores it within the wider context of Anglo-French relations, identifying the original plot as being masterminded by the French government, in partial retaliation for Henry’s support of the duchy of Brittany in its efforts to head off French expansionism. Amin then follows the twists and turns of European diplomacy, seeing Warbeck expelled from France, into the waiting arms of Maximilian, King of the Romans, and his stepmother-in-law, Margaret of York, Dowager-duchess of Burgundy, and sister of Edward IV and Richard III. Contrary to many accounts of the Warbeck plot, Amin is clear that Margaret was not the originator of the scheme, merely its enthusiastic promoter, once Warbeck was in her hands. Amin discusses Margaret’s motivations – considering both personal and political aspects, and even the possibility that she genuinely believed the young man to be her nephew.

Throughout the book, Amin is careful to look at more than one side of any argument, contemplating the personal as well as the political, and not immediately reaching for the cynical interpretations that historians are prone to make.

In this, his third book, Amin has hit his stride as a writer. The facts are clearly laid out, the inferences drawn are supported, and the tale moves along briskly. Personal and political motives are interleaved. Drawing threads together, he even comes up with a plausible reason for Henry to have commissioned a grave marker for the vanquished Richard III, some ten years after Bosworth.

Ultimately, Amin shows that invasions could only be successful if they were supported by the nobility – Henry VII himself had had the backing of senior members of the Yorkist regime, as well as the remnants of the Lancastrian nobility – Simnel and Warbeck did not. Similarly, the support of foreign powers was useful to a point, but when the ambitions of the rebels and their backers diverged, continental politics prevailed - when pretenders were no longer useful to their backers, they were dropped.

Henry VII had been lucky that domestic politics and international politics had coincided to propel him to the throne – none of the pretenders ever managed to put together those factors in a timely combination. Not that that should give the impression that Henry’s survival was a matter of luck. Whilst Henry VII is usually painted as cautious, calculating, always weighing up the pros and cons of any decision, Amin reveals him to have been him energetic, proactive, quick to jump on any threat. These are not necessarily mutually exclusive characteristics, but generally it is a quite different feel. A particularly interesting section is Amin’s exploration of the execution of Sir William Stanley – brother of the king’s stepfather, and instrumental in the victory at Bosworth, yet executed for indicating that he would support Warbeck, if he proved to be Richard of York. Amin explains cogently why Stanley could not be pardoned, despite his previous service.

An excellent addition to any Tudor library.