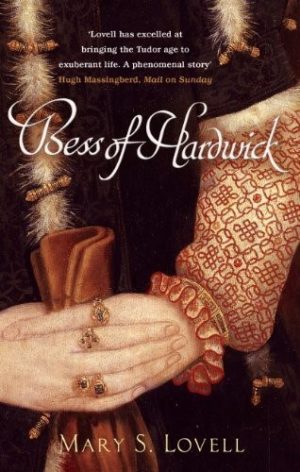 A meticulous and detailed account of Bess of Hardwick’s life from cradle to grave.

Mary S. Lovell is an accomplished biographer, whose oeuvre stretches from the Mitford sisters to Amelia Earhart.  Her biography of Bess of Hardwick takes her back further in time than any of her other works, but she has delved into a wealth of sources to give us a thorough picture of Bess. Like so  many women who dare to stand up for the rights, or to have ambitions on their own account, Bess has often been vilified as a shrew and a Tudor gold-digger, but Lovell paints a much more nuanced picture.

To promote your family, to marry well, and to increase your wealth were fundamental mores of Tudor society. Bess managed to do all these things without being born into a family of wealth or influence. Lovell shows us how Bess learnt from the financial straits her father’s early death left her mother in to use the law to fight for her own rights.

The information about Bess’ four marriages is also full of interest - in particular, the use of letters and contemporary documents to show that, far from being a harpy, Bess was genuinely attached to her husbands, and they to her.

The ins-and-outs of the legal quarrels surrounding the estates of Bess’ third husband, Sir William St Loe, are both new in terms of biographies of Bess, and also interesting – Lovell, by pure coincidence, is married to a man connected to the St Loe family, and found new documentary sources in their own family archives.

Lovell explores the breakdown of Bess’ fourth marriage to the Earl of Shrewsbury. She shows the unbearable strain put on their relationship by the guardianship of Mary, Queen of Scots. Interestingly, she also explodes the myth that Bess quarrelled with Elizabeth I, pointing out that despite diligent efforts, she has found no contemporary evidence of such a quarrel.

The character of Bess comes across extremely well – Lovell is obviously an admirer, but it is not hard to see in Bess how financial insecurity drove her all her life, and how she later used her money to control her family – although they loved her, she dominated them by holding the purse-strings.

The saddest part of the story is the breakdown in the relationship between Bess and her granddaughter, Arbella. Bess had played for high stakes in arranging a secret marriage between her daughter and a potential heir to the throne, and she paid the price when she had to witness Arbella’s increasing frustration and despair.

The book is not a light read, you need to concentrate, and keep focus, but it is very rewarding.